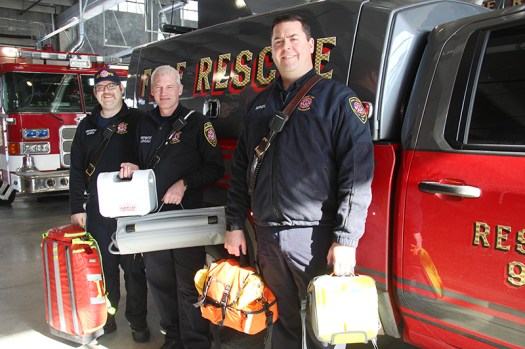 Albert Lea firefighters Andy Munson and Chris Harveaux and Capt. Bart Berven stand in the fire station in late January with some of the medical equipment they use while responding to medical calls. Sarah Stultz/Albert Lea Tribune 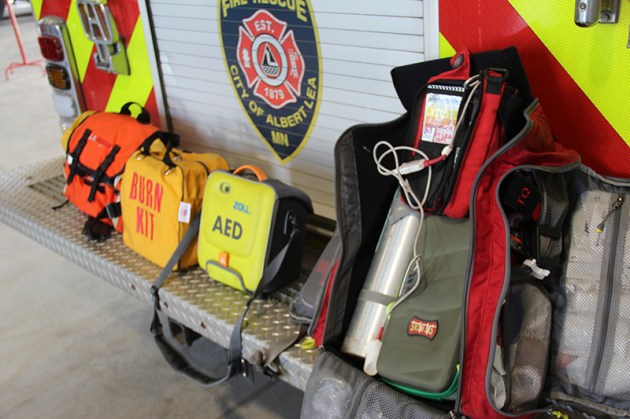 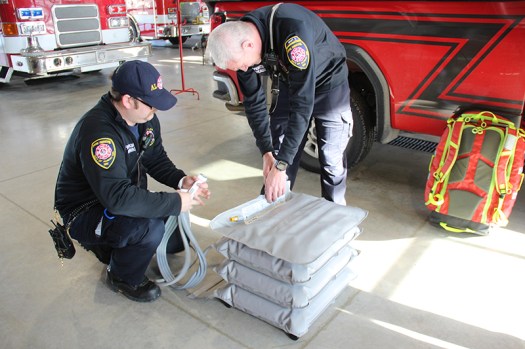 Firefighters Andy Munson and Chris Harveaux demonstrate how a piece of equipment is used to help people who have fallen on the ground rise up to a seated position. Sarah Stultz/Albert Lea Tribune 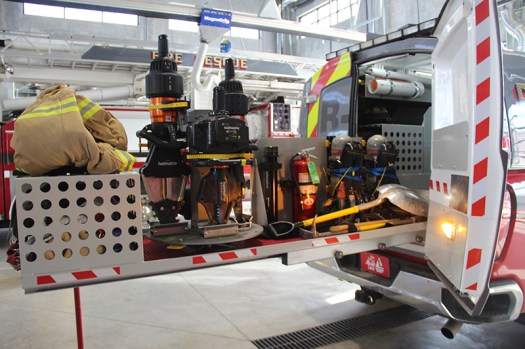 The primary medical truck the firefighters use is filled with numerous pieces of equipment, not only for medical calls but for fires and other emergencies. Sarah Stultz/Albert Lea Tribune 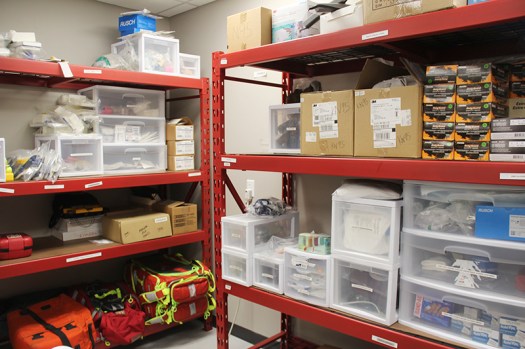 Aside from their duties of fighting fires, conducting commercial and rental inspections, and leading the city’s reassurance program, Albert Lea’s firefighters are becoming increasingly known for their medical training and response.

Anyone hired as a full-time firefighter with Albert Lea Fire Rescue is required to pass a seven-credit college course certifying them as a nationally registered emergency medical technician within six months of their hire date.

Berven said the firefighters have always had to have some medical training for some of their certifications, and in the 1970s, the city looked at if it wanted to be in charge of the ambulance service. Ultimately, it declined, and a private ambulance service has run the service in the years since — Naeve Ambulance, Albert Lea Medical Center, Gold Cross Ambulance and now Mayo Clinic Ambulance.

In recent years because of staffing shortages and after Mayo Clinic Ambulance consolidated services between Albert Lea and Austin, however, the fire department decided to provide additional service where they could and respond to all medical calls.

“We saw the need was there, we had the people that had the specialty training, why wouldn’t we do something?” Berven said. Many of the firefighters had also previously worked for an ambulance service.

He said the timing was right with the start of Deputy Fire Chief Jeff Laskowske coming in from outside of the community, who was able to provide an outside perspective that other fire departments he had worked with are doing the same thing.

Though EMTs have some procedures they cannot do, as a whole they are certified in many of the same skills as paramedics, with the exception of administering some medications and performing some invasive procedures, such as intubating a patient.

Berven said after the first month of the fire department adding in the medical calls, everyone realized the benefit of having the fire department respond to calls. They are able to begin emergency treatment until the ambulance crews arrive and provide additional hands if necessary.

The captain said responding as EMTs has also been good training for the department, helping them get into more homes and learn the floor plans of more types of houses, as well as streets in the community. It has also helped build relationships with people in the community. These are all skills that will help them in the event they have to respond to a fire at the same house.

Firefighters can also bring additional skills if needed for extrication or for breaking and entering into a home, if necessary.

Though they spend a lot of time on medical calls throughout their days, Berven said they remain dedicated to responding to fires and other incidents they are trained in and in keeping their skills up in all areas.

“I’m just really happy with the positive impact I’ve felt we’ve made on the community,” he said, noting that combined with the police department’s quick response, the department has seen more cardiac arrest saves since starting this approach.

Regarding costs to provide the services, Berven said the city tries to be good stewards of taxpayer funds. While the city purchases all of the starting supplies for the EMS portion of their calls, Mayo restocks the supplies at no charge.

Berven said the department responded to 2,700 emergency calls in 2021, including medical calls, fires and crashes. This number does not include other non-emergency calls the firefighters are a part of, including inspections and other duties.

The supplies they bring to calls include both pediatric and adult bags, burn kits, AEDs, a glucometer, Narcan, oxygen and machines to test blood oxygenation, CO levels and heart levels.

“We can do quite a bit with the limited equipment we have,” he said.