Citizen of the Year: Albert Lea woman finds joy in volunteering with numerous organizations in the community 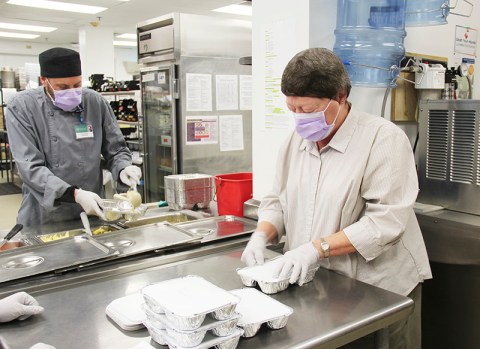 Cindy Gandrud, director of the Meals on the Go program in Albert Lea, right, seals up meals to be taken out to residents in late January, along with David Callahan, cook at Mayo Clinic Health System in Albert Lea, and Nancy Brandt, dietary aide, not pictured. In addition to other duties, Gandrud volunteers three days a week to prepare meals for distribution. Sarah Stultz/Albert Lea Tribune 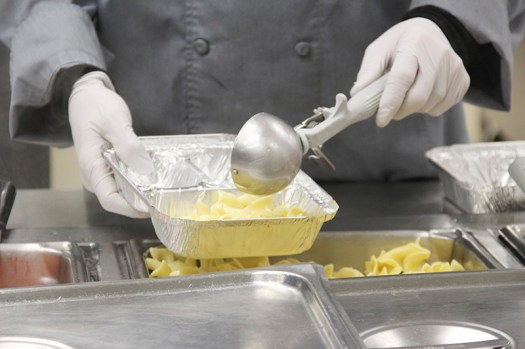 David Callahan, cook at Mayo Clinic Health System in Albert Lea, plates up beef stroganoff and carrots in late January for the Meals on the Go program. Through the program, meals are delivered once a day every weekday. Sarah Stultz/Albert Lea Tribune 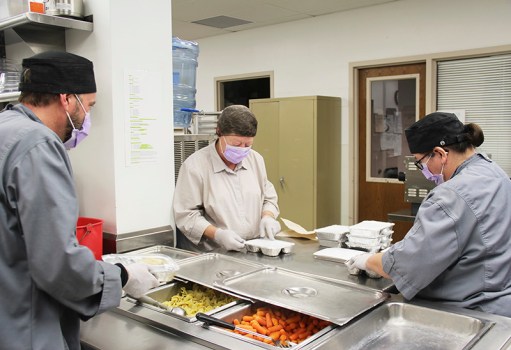 From left, David Callahan, Cindy Gandrud and Nancy Brandt box up meals to be taken out to residents as part of the Meals on the Go program. The meals are made in the kitchen on the lower level of Mayo Clinic Health System in Albert Lea. Sarah Stultz/Albert Lea Tribune 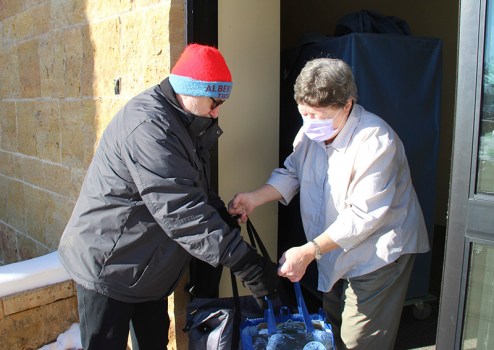 Cindy Gandrud, right, hands off bags of meals to a volunteer to be delivered through the Meals on the Go program. Sarah Stultz/Albert Lea Tribune

Since she was a child, Albert Lean Cindy Gandrud has known the value of volunteering.

“My mom and dad volunteered, and I not only saw that but I was a part of it so much,” Gandrud said.

She watched them take part in their volunteer efforts, and the way of life became engrained in her as she grew into adulthood.

Gandrud now leads Albert Lea’s Meals on the Go program, is chairwoman of the Friends of the Library board and is involved in numerous efforts at First Lutheran Church. She was involved in several other service opportunities before the COVID-19 pandemic that she hopes she will be able to pick back up soon.

“It’s my heart,” she said. “I enjoy giving back to the community. It has given a lot back to me.”

For her efforts to give back in numerous parts of her life, Gandrud is being recognized as the Tribune’s annual Citizen of the Year.

“It is difficult to imagine how any one citizen has done so much and continues to offer so much for our community, especially when it is done with so much joyful, selflessly enthusiastic energy,” said Bill Buege, who nominated Gandrud for the award.

A life of volunteering

Gandrud, 72, has lived in Albert Lea most of her life with the exception of about eight years.

Her experiences as a youth helped shape her into the giving person she is today.

Buege said Gandrud accompanied her dentist father as he provided dental care for nursing home residents and she remembers traveling with her mother as she brought a woman to visit a relative in prison.

As a youngster, she babysat for people, then volunteered as a nursing assistant in nursing homes and became a candy striper in Naeve Hospital, he said. Later, she volunteered at both the old Carnegie and Austin Community College libraries. She worked nights as a volunteer advocate at the Victim Crisis Center, was a respite volunteer at Senior Resources, provided canine therapy with her dog at nursing homes and volunteered care for hospice patients. She hopes to resume many of these services when COVID restrictions are lifted, though there are still many other efforts she is involved in.

She said she was introduced about 10 to 12 years ago to the Meals on the Go program through Virginia Hermanson, a longtime family friend. The program delivers meals Mondays through Fridays to people throughout the community.

Hermanson started her as a driver delivering food to residents, and then as a checker, who helps box up the food and get it ready for distribution.

When Hermanson retired, Gandrud took over doing intake — people call her to get added or removed from the list or to make changes in their dietary restrictions.

Then, about five years ago, Joann Schwartz, who led the whole program at the time, retired, and she asked Gandrud to take over as director.

In that role, every weekday morning Gandrud calls Mayo Clinic Health System in Albert Lea, whose staff prepares the food, and lets them know the stats for the day — how many people will receive food, who may have canceled for that day or if there is anyone new to add to the list.

On Mondays and Tuesdays, other volunteers help dish up the food with the health system staff and get the food out to the volunteer drivers. Gandrud fills in the other three days of the week.

She said the program, which started 50 years ago, serves about 75 people presently and has about 55 volunteer drivers altogether.

In addition to providing a healthy meal for residents, it also is a way for them to get interaction with others.

“It means a lot to these people that really need it,” she said. “A lot of their children call and thank us because not only do we deliver a meal, we check on them.”

While many of the residents the program serves are older, there are some younger people that get the food, too. Some get it long-term, while others it’s only for a short-term period after a surgery.

Cost is $2.90 per meal, and if people qualify, they can get a waiver from the county to cover the cost.

Gandrud said beyond the visits to drop off the meals, many of the drivers go above and beyond and build relationships with the people they serve, helping them with other projects at their homes if needed.

‘Books have been my passion’

Aside from the Meals on the Go program, Gandrud is chairwoman of the Friends of the Library, which meets monthly and operates the used bookstore on the lower level of City Hall. The organization raises funds for the Albert Lea Public Library, where Gandrud worked for many years.

In addition to the bookstore, another of the Friends of the Library’s big priorities is the twice-annual book sales. This year, board members also welcomed patrons back to the library when it reopened for more hours after limited hours because of the pandemic.

Gandrud said she enjoys the people she works with on the board, who come from a variety of backgrounds. There are lawyers, poets, writers and a young mother, to name a few, and children’s librarian Patty Greibrok also participates to tell what things are happening in the library.

Many roles through the church ministry

In addition to her passions with books and with helping people through the Meals on the Go program, Gandrud has taken on numerous roles at First Lutheran Church.

Gandrud, who was baptized into First Lutheran Church as a child, has taught Sunday school for 40 years for the kindergarteners, works in the church’s welcome center greeting people and is head of the church library board.

She serves as treasurer and pianist of First Lutheran Church Women and is also on several other committees for the women of the church.

She recently finished her term on the church council, and she coordinates volunteers for the church’s audio booth and on most Sundays and Wednesdays oversees the Powerpoint projection.

She is also a part of the counting committee that meets every other Monday to count offerings given to the church and is a part of the church’s social ministry team, which is focused on outreach.

She said the team collects an offering in March and October with proceeds going to the Salvation Army food pantry. Also on a Saturday in May and October, Crossroads Trailer brings a semi, which they fill with quilts and baby kits donated from churches near and far and that are distributed around the world.

Two years ago, the team started a food ministry program, where between 100 and 150 people are fed a hot meal on Thursday nights, no questions asked.

‘It brought me to tears’

Gandrud said she was shocked when she found out she was selected as the Tribune’s Citizen of the Year because of all of the other wonderful people she knows in the community who are doing good things.

“It really humbles me,” she said. “It brought me to tears.”

She said she is grateful for the opportunities she has to serve in the community and is content with the life she leads.

“I enjoy giving back to the community, to my church, to individuals — and helping them,” she said.

Other nominees for Citizen of the Year Award

Citizen of the Year Committee