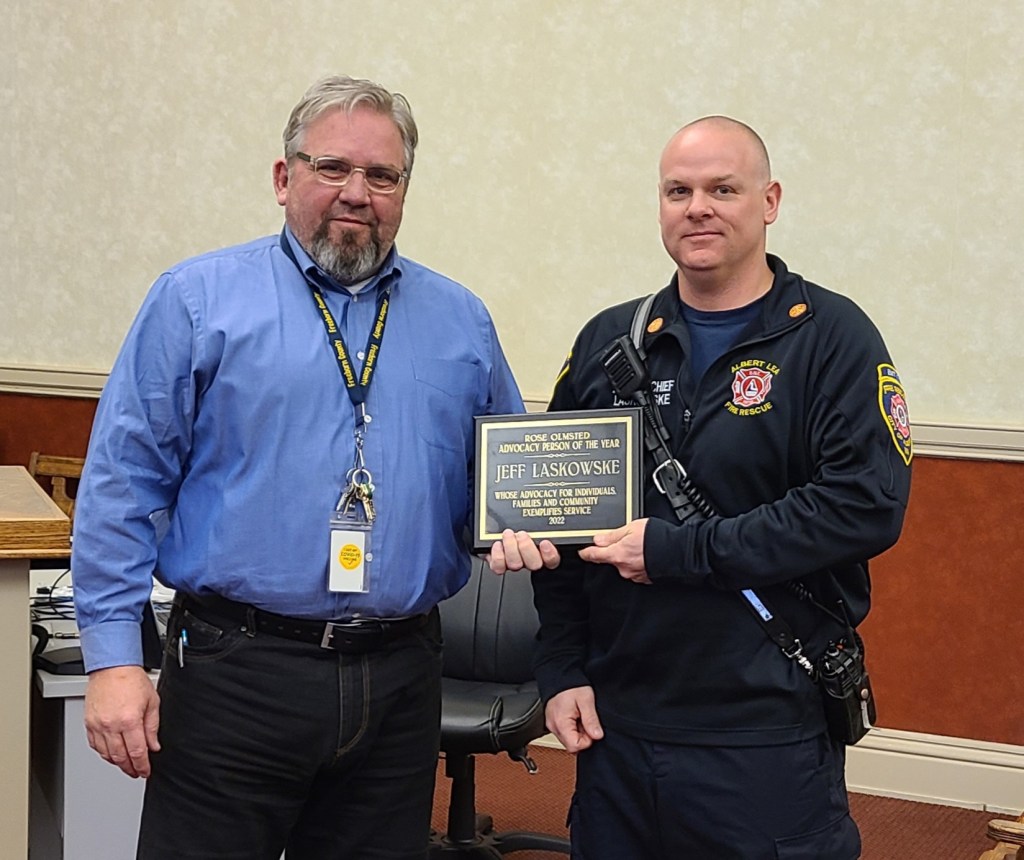 Freeborn County’s administrator on Tuesday presented the annual Rose Olmsted Advocacy Award to Albert Lea Deputy Fire Chief Jeff Laskowske for his work in the community both professionally and personally.

County Administrator Tom Jensen said the award has been given out for seven years and is named after longtime former county employee Rose Olmsted, who was passionate in her work to better the community. The award aims to recognize people who work diligently with advocacy issues in the county throughout the year.

Reading from the nomination, Jensen said Laskowske has done much to better the fire department in Albert Lea, including having his crews respond to not only fires but also crashes and medical calls. Fire crews are often the first emergency personnel on scene.

He was integral in starting and coaching the Tigers sporting clay team and spent hundreds of hours recruiting and setting up fundraising for that team, Jensen said. Laskowske also started the Albert Lea Archery Club and is involved in numerous activities with his church.

He also played a key role in the new fire station and in setting up better procedures for firefighters to clean after fires, helping decrease chances of cancer from smoke and toxins, updated trucks and equipment and started the department’s drone program.

“I’m very honored and humbled to receive this,” Laskowske said, thanking his wife in attendance for her support in all of his endeavors.

“I’m grateful for everyone that’s involved in all those events and activities, between all my firefighters, the coaches within the trap team and all those other events. You can’t be successful in anything without the other people with you. You can’t do it by yourself.”

Jensen presented Laskowske a plaque for his service.

In other action, the county board:

• Approved a resolution asking the Legislature to reevaluate how revenue from the state’s solid waste tax is spent and provide some of the funds to counties to invest in infrastructure and expanded operations tied to waste reduction and recycling.

• Amended a section in the county’s code of ordinance regarding work completed within any easement or right of way.

Currently, any work done within an easement or right of way and takes place on at least four contiguous township sections is considered a “major essential service,” and the company performing the work must obtain a conditional use permit.

The amendment classifies any work within a right of way as a “minor essential service” and states it would need a right of way permit issued by the County Highway Department.

• Approved an expansion in the conditional use permit for Northern Natural Gas to construct a new pipeline regulator site near 240th Street and 725th Avenue in Manchester Township. The site will include a small graveled pad, a small new structure and facilities used to regulate pressure along the pipeline, all of which will be permitted.

• Accepted the resignation of McKenna Cech as an appraiser and voted to refill the position.

• Renewed the county’s membership in the South Central Community-Based Initiative, which assists people with mental illness. Historically the organization has been primarily concerned with adult mental health services, but it is expanding to also include special projects to address the need for children’s mental health services on a regional level.

• Renewed an interagency cooperative agreement with the Minnesota Department of Human Services for two years to receive reimbursement for child support services provided by the Sheriff’s Office and County Attorney’s Office.