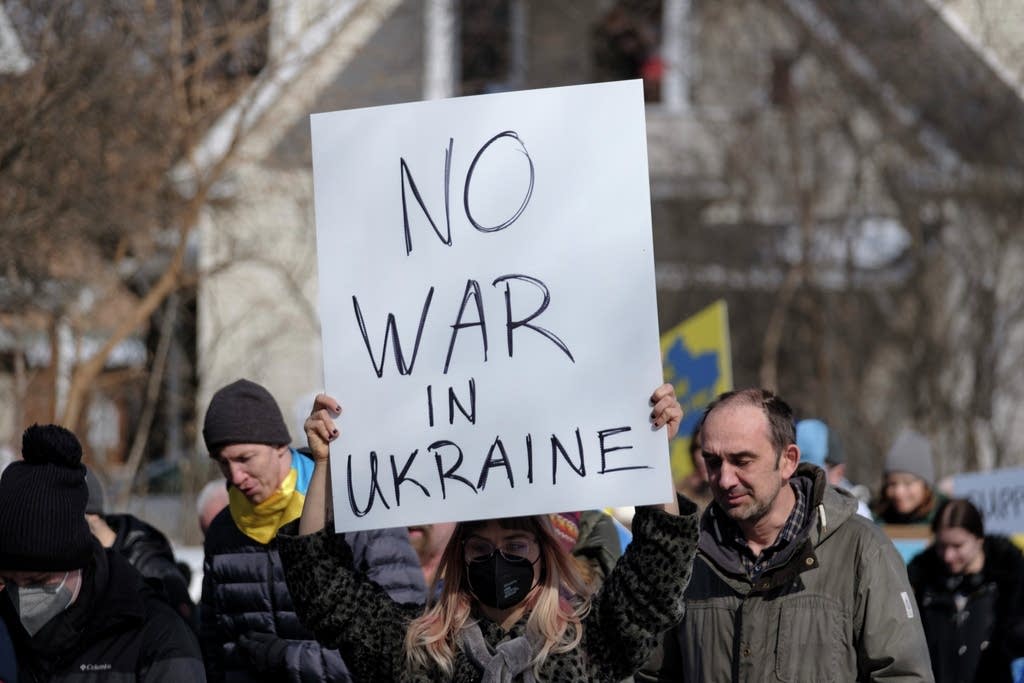 A woman holds a sign reading “No war in Ukraine” during a march from St. Michael’s and St. George's Ukrainian Orthodox Church in Minneapolis on Feb. 27 to condemn Russia’s invasion of Ukraine. Minnesota's Russian-American community is expressing its solidarity with Ukraine and speaking out against the aggression. Tim Evans for MPR News file

With the invasion of Ukraine now in its second week, Minnesotans with Russian ties say they’re growing increasingly concerned about friends and relatives in their home country. They fear that the toll of international economic sanctions will fall hardest on their loved ones.

Many also say they support Ukraine and oppose Russian President Vladimir Putin’s attack on the country.

Marina Liberman moved to the United States 30 years ago, just after the Soviet Union collapsed and Western leaders declared victory in the Cold War. She and her husband Naum settled in St. Paul, and opened a restaurant that’s since become a neighborhood fixture.

Moscow on the Hill, named for the Libermans’ hometown, serves borscht, blini and caviar, plus their signature, horseradish-infused vodka.

During a lull before dinner service one day this week, Liberman made it clear that she opposes the Russian invasion and Putin.

“I hope that the world is going to squeeze Putin and he’s going to stop. I hope that he still has part of his brain telling him that he needs to stop,” Liberman said.

Even after posting a message of solidarity with a photo of a Ukrainian flag on the restaurant’s Facebook page, Liberman has faced some anti-Russian trolling. They even included demands that she remove “Moscow” from her restaurant’s name.

But Liberman says she’s received many more messages of support.

Liberman speaks regularly with her sister-in-law and other relatives in Moscow, and her biggest concern is for them. Most are in their 70s and live on pensions. Liberman fears that her loved ones — not Putin and his oligarchs — will bear the brunt of the sanctions, such as increases in the cost of fuel and food.

Liberman said she’s fallen out with some longtime friends who watch Kremlin-controlled TV and support the Russian president.

“I’ve noticed that for the last two or three weeks, maybe even months, I am not getting calls from them. So I am their enemy now because I do have a different opinion and I support Ukraine,” Liberman said.

Masha Zavialova is another of the estimated 6,000 people born in Russia who call Minnesota home. She moved here in 2001, when her son was in elementary school, and is now “grateful” because she said “my son would be drafted” if they had remained.

Zavialova, chief curator at the Museum of Russian Art in Minneapolis, called the invasion devastating and appalling. Zavialova said she chats regularly with her sister in St. Petersburg, who’d long tried to convince her that Putin wasn’t bluffing.

“Because I was out of touch, I didn’t know how crazy, how deranged he was,” Zavialova said. “And yeah, she was right.”

Even though she says Putin has plunged Russia into an abyss, Zavialova remains hopeful that events could turn in Ukraine’s favor.

Arkady Shemyakin, a University of St. Thomas math professor who grew up in Siberia, also opposes the war.

“For Russian and Ukrainian peoples, which are historically tied, recent years definitely saw our prospects for a good future being pushed further and further away,” Shemyakin said.

Shemyakin, whose specialty is risk modeling, said it’s impossible to predict how the crisis might end. But Shemyakin says he’s optimistic that after the Russian leader is long gone, the wounds that Putin opened with his neighbor will begin to heal.