Edward George Henry Hanssen, 94, of Glenville, MN, passed away on Saturday, March 12, 2022 at Good Samaritan Society of Albert Lea. A Funeral Service will be held at 2PM on Thursday, March 17, 2022 at First Lutheran Church of Glenville with Rev. Dale Svendsen and Rev. Krista Stokke presiding. Visitation will be from 5-7PM on Wednesday, March 16, 2022 at Bayview/Freeborn Funeral Home and one hour prior to the service at the church. Burial will be at Greenwood Cemetery of Glenville, MN. Online condolences may be left at ww.bayviewfuneral.com. 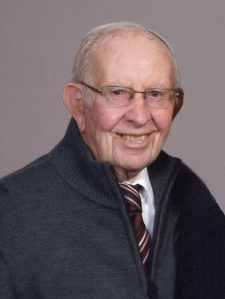 Edward was born on February 11, 1928 in Fonda, Iowa, to Christ and Anna J. Hanssen. He attended school and graduated in Pomeroy, Iowa. Eddie was then drafted in the United States Army in 1950 and was discharged in 1951. After leaving the service, he moved to Joice, IA, where he worked as a farm hand. In September of 1952, Eddie met Violet Wallin at Carl’s Roller Rink. Eddie attended school in Charles City, Iowa to get training in Linotype. Later, he was employed by the Northwood Anchor. He worked at the Northwood Anchor both as a full time and part time employee from 1954 onwards.

Eddie and Violet were united in marriage on May 5, 1957 at First Lutheran Church in Glenville. The couple settled on a farm near Glenville. In 1968, Eddie purchased his own farm. Eddie farmed corn and soybeans and raised cattle and hogs. Eddie helped out at Albert Lea Abstract, which was owned by Violet, with building maintenance. Eddie never retired helping his boys out on the farm driving the tractor.

In Eddie’s spare time, he enjoyed gardening, square dancing, and a card club for many years. Eddie hand picked Sheriff by fellow dancer for the Grapevine Twist Square Dancing Club, traveling to Hawaii and Alaska and all over North America. He volunteered at church ringing the bell, ushering and with the Salvation Army and helping out at ARC Suppers..

A special thank you to the staff at Good Samaritan Society of Albert Lea and Mayo Hospice for the wonderful care of Eddie.