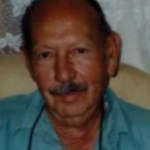 Harold Clarambeau was born September 18, 1937, to Felix and Alice (Martel) Clarambeau, in Huron, South Dakota. He grew up in the Huron/Cavour area and attended the Minor Country School south of Huron. He continued his education at the Vocational Technical School of Beloit, Wisconsin. During the Cuban Missile Crisis, Harold was in the Wisconsin National Guard and was called to active duty in Ft. Lewis, WA.

He was united in marriage to Norma “Lee” Snelson on December 27, 1987, in Amarillo, TX and Lee brought one son to the family. Harold owned radiator shops in Huron, SD, in the 60’s; he was President and ran Burning Brule in Chamberlain SD in the 70s. Harold worked as an Insurance Agent in various capacities from the 80s until he retired, owning an Insurance Brokerage business with Lee in Hermosa, SD, until they retired and moved to Ft. Pierre in 2004. He enjoyed fishing, hunting, trapshooting, traveling, gambling, and the dogs he has had through the years.

He was preceded in death by his wife, Lee Clarambeau, his parents, and 7 siblings.