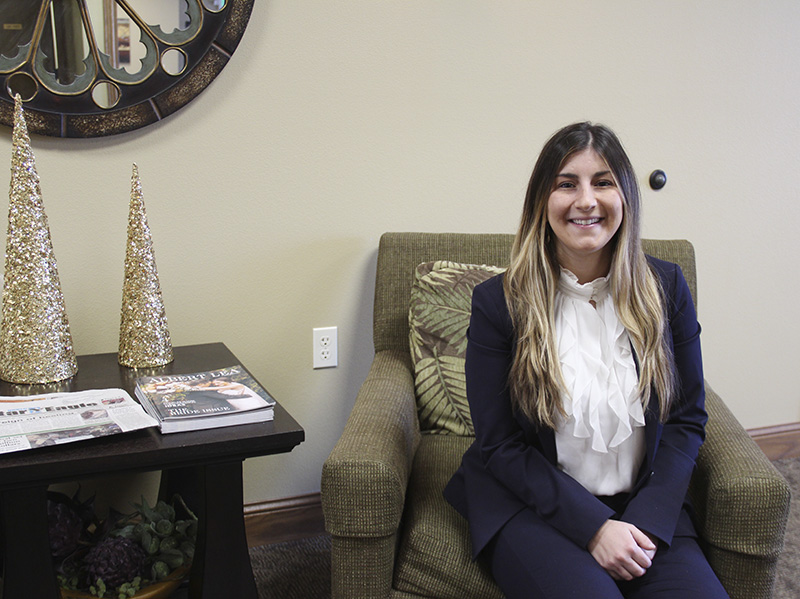 For many years, the funeral industry has been passed down from one generation to the next, oftentimes dominated by men.

However, according to the National Funeral Home Directors Association, more than 60% of students studying mortuary science nowadays are women, and a majority of mortuary school graduates no longer come from families that ran funeral homes.

Asya Ozdemir, who is the location manager and a funeral director at Bonnerup Funeral Service, is an example of this statistic.

Ozdemir, 27, said she has always enjoyed science, anatomy and biology classes in school and originally thought she wanted to be a nurse.

She became a certified nursing assistant, and said while she enjoyed it, she couldn’t see herself retiring from the job.

Around the same time, she found out her grandmother’s health was declining, and she and her mother got on a plane and traveled to her family’s native country of Turkey, getting there just before her grandmother passed away.

“That’s when it opened up my eyes about helping families in a different way,” Ozdemir said. “I came back home and said what can I do with this?”

At first, she considered becoming a medical examiner and then an investigator before she started researching about becoming a mortician or funeral director. She called one of her friends whose grandmother was a florist for a funeral home and asked her if she could connect her with a funeral director to shadow.

“I just knew right there I wanted to do this,” she said.

So she attended the University of Minnesota-Twin Cities and earned a bachelor’s degree in mortuary science.

After college, she started an internship in Owatonna and then went back north to Cottage Grove to finish up her internship and worked there for a 3 1/2 years as a licensed funeral director at Kok Funeral Home, which is owned by Vertin, the parent company that also owns Bonnerup Funeral Service. She stayed there until the opportunity came up in Albert Lea in 2021 to be not only a funeral director but also the location manager at the funeral home.

Ozdemir, who now lives in Albert Lea, said her duties as a director include a large variety, such as receiving the initial call when a person dies, meeting with families to plan arrangements and services, helping pick out headstones, planning graveside services and lining up plans with cemeteries. She also does embalming of the deceased individuals who come into the facility.

But she said it doesn’t end there.

“One day we’re calling an electrician, or calling a plumber,” she said. “One day I’m a therapist, a friend.”

She helps two others plan aftercare activities for families who have lost loved ones, does billing and other tasks like washing cars and even cleaning. She also is a teacher for two students who have been coming in to learn more about the industry and are in school to become a funeral director.

Ozdemir said she graduated with 30 people from the U of M program.

She said the job is a rewarding one, though it does have its challenges, particularly when she is helping families of sensitive deaths, such as the death of a child or a suicide.

“When you don’t know them it does make it a little easier, but we’re also human, we’re going to cry, and that’s not a bad thing,” she said.

Though Bonnerup is presently a few funeral directors short right now, Ozdemir wanted to let the community know she is still there to help families in need.

“It might not be some of the same faces you’re used to, but we’re still here,” she said.

‘A member of your family for about a week’

Josh Fossum started at Albert Lea’s Bayview/Freeborn Funeral Home about three years ago and now works as both a funeral director and manager of the funeral home.

Fossum said he was a funeral director at a St. Paul funeral home and was poised to manage a larger funeral home until the company restructured and the position he was being trained for was no longer there.

One of his directors who works for him now sent him a link to the job opening for the director/manager position, and he applied, never having been to Albert Lea.

He has no family background in the industry but looked into the position initially because it is a profession that is different every day.

“I like that it’s a constant change,” he said.

He was one of 19 in his graduating class from the University of Minnesota, and one of only four from his class who are still in the profession.

Fossum, though only in his 40s, is presently the oldest funeral director at Bayview. He said the funeral home recently had another director in his 20s and also has Dominic Krezowski, who is in his 30s. Another intern, who is working as support staff right now, is getting licensed to be a director and will start in that position soon, along with a student in his mid-20s, once he finishes his degree.

“There’s a lot of turnover in the funeral industry right now,” Fossum said.

He said a lot of funeral home owners are getting old and are looking for a line of succession, and not everyone’s child wants to be in the business. He noted he thinks there are less second generation owners because of how difficult the job is.

“We’re on call 24 hours a day,” he said. “We miss birthdays, holidays … it isn’t always appealing.

“There are obviously rewards to this job, but going out at 3 a.m. is difficult, especially when it’s 11 below zero.”

It is also an emotional job, he said, as being around people who experience death everyday can wear on people, though he tries to remind his directors it is OK to laugh and smile.

Fossum said Bayview is a full-service funeral home, offering everything from traditional burials, cremations, headstones, monuments and prearrangement services, among other services.

“We get to be a member of your family for about a week,” he said. “You get to serve families in a lot of capacities a lot of jobs just don’t do.”

He enjoys working in a city the size of Albert Lea, where he can go downtown and see someone he served.

“Even then you’re still being thanked,” he said. “It’s nice to see these people, versus in the Cities you serve someone and never see them again. It’s a little colder.”

He enjoys building relationships with families and helping make the process as easy for families as he can as they continue with their grieving process.

“We answer our phones 24 hours a day, and when anybody needs anything, we’re more than happy to assist,” Fossum said. “It’s kind of just what we do.”

Fossum and his wife, Chastity, together have seven children.

Learning to speak a new language