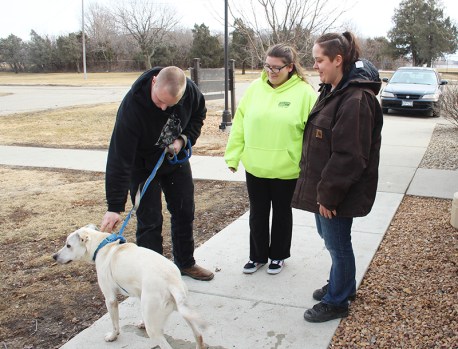 Joseph Cook, Tawni Hammer and Kylie Gehring take a dog from the Humane Society of Freeborn County out for a walk. Alex Guerrero/Albert Lea Tribune 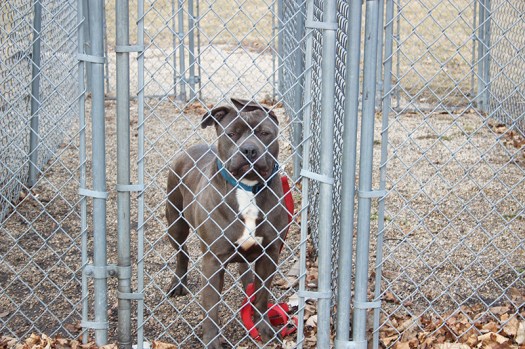 Christa DeBoer, shelter manager for the Humane Society of Freeborn County, could use your help.

“The Humane Society is a nonprofit, we always have been,” she said. “We depend on donations, grants, community support to function.”

But as the organization grows, money has been running thin lately, and DeBoer is concerned that donations might outpace expenses.

“We just have to up our donations some to continue to help the community,” she said.

So she’s trying to preempt that before the situation becomes unmanageable through fundraising.

“Let’s figure out how to [get] a consistent money source,” she said.

According to DeBoer, if the Humane Society stopped receiving donations, it would have roughly six months worth of funding for operations.

And if expenses outpace funding, they’d have to cut costs or the shelter would be turned over to the city, she said. That could mean not accepting as many animals, euthanizing them after they’ve been in the shelter for five business days, reducing staff and/or taking a pay cut, which could mean finding a full-time job somewhere.

“None of us want to allow the shelter to become a kill shelter again,” she said.

They also wouldn’t be able to intake any new animals, which means they couldn’t afford spaying or neutering or providing shots.

“[That] would be unfortunate for people to not have a place to take their animal if they needed to,” she said.

DeBoer said she took fundraising seriously, but said if they couldn’t bump up their bank account she’d start worrying.

“I’ve been with the shelter for so many years,” she said. “I remember … they called and they said, ‘Well, I can pay you one more time,’ and I said ‘OK.’

“We got a grant for $10,000 in the next week, and we kept operating. Miracles happen, things happen, the community steps up. I just have to have faith that that will happen again.”

The Humane Society — a no-kill shelter — has been run by DeBoer and her two-person team for 15 years. Prior to that, she has fostered animals since 1996. This was the second time she has felt the need to start asking for donations.

Last year, she and her team found homes for 286 cats and 56 dogs. Adoption rates she said were comparable to rates pre-pandemic. But that adoption number was down from 2020.

“We cleared out,” she said. “It was fantastic.”

If you would like to donate, you can send checks — payable to Freeborn County Humane Society — or money to PO Box 423 in Albert Lea. If you would like to set up monthly donations through ShelterLuv, text 507-377-8501. You can also inquire about donating through email (freeborncohumanesociety@gmail.com) or the organization’s Facebook page by sending a message. You can also donate through PayPal or visit at 101 James Ave.

“People are wonderful,” she said. “They send money, they stop with stuff, they give us physical things like food, cat food and dog food. Everybody’s been so supportive.”

The shelter is presently open by appointment only.