John Ethan Light passed away peacefully on February 20, 2022, at Prairie Senior Cottages in Albert Lea surrounded by his wife, Ginny, and daughters, Cindy and Cheryl. 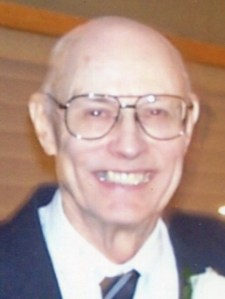 A memorial service will take place at 11:00 a.m. on Saturday, April 2, 2022, at Bonnerup Funeral Service with Pastor Caleb Hurley officiating. Time for visitation will take place one hour prior to service. Interment will follow lunch at Graceland Cemetery.

John was born on Nov. 8, 1933, to Ethan A. and Mary Jane (Rich) Light on the Sewerks Farm north of Burt, IA. He was baptized in a private service at the Old United Methodist Church on the corner of Washington Avenue and College Street in Albert Lea on April 7, 1947, along with his mother, sisters, brother, and nephew Glen. John attended Lime Creek Church on the Iowa/Minnesota State Line Road after they moved to the Emmons area. John finished high school in Emmons, MN in 1951.

John began working at Queen Stoves in Albert Lea in 1952 which later became Scotsman. He worked there for 43 years. John was married to Donna Eisenbise Light on Oct. 25, 1953, at Salem Lutheran Church, Albert Lea. To this marriage four children were born: Cindy, Rick, Alan, & Cheryl. John and Donna were able to celebrate 50 years of marriage before Donna’s death in 2004.

On January 4, 2014, at age 80, John married Virginia Thompson (Ginny). Ginny brought love and renewed joy into John’s life. He and Ginny continued to worship at Crossroads Evangelical Free Church and served as leaders of a grief share group there. He loved supporting the ministry in many ways and volunteered his time to care for the property, greeting and ushering, and socializing with other members and worshipers. Ginny and John were lovingly devoted to each other. He also enjoyed music, reading his bible, watching, and discussing sports, taking care of his yard, feeding and watching wild birds, visiting with family and friends, and playing cards (he was quite the card player). He especially enjoyed his grandchildren and great-grandchildren.