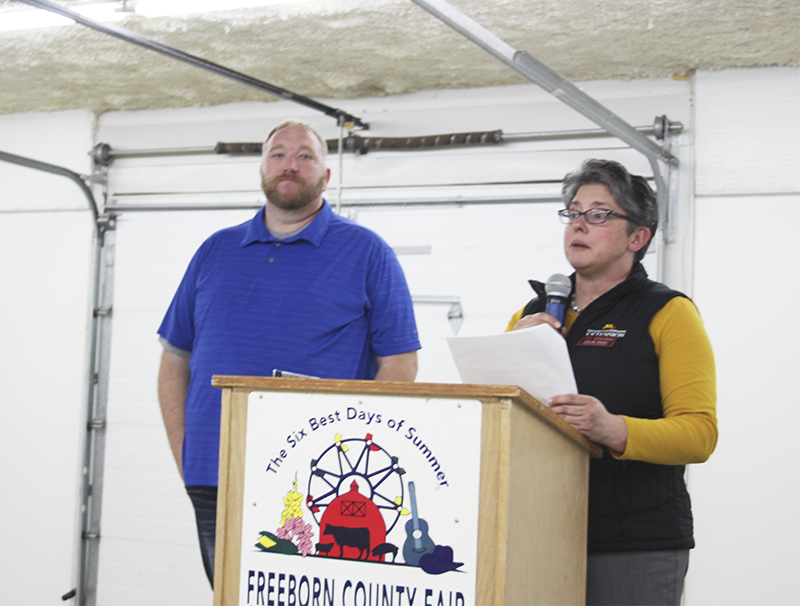 Johnson Family Farms was named the 2022 Farm Family of the Year during the 17th annual Albert Lea-Freeborn County Chamber of Commerce Agriculture Luncheon Tuesday afternoon at the Fairlane Building at the Freeborn County Fairgrounds.

The award honors families from Minnesota and their contributions to agriculture and the community.

“Thanks to the chamber and committee,” Chad Johnson said. “I appreciate advocating for agriculture in Freeborn County, I appreciate the recognition. Thank you.”

Johnson and his family live on his family’s third-generation corn, soybean, turkey and hog farm northeast of Geneva.

“He’s always been a good neighbor and has continued the tradition of progressive farm practices like his father and grandfather before him,” she said. “He knew from the beginning that a sustainable farm would include natural fertilizer from livestock.”

He has built barns that reduce the amount of artificial fertilizers needed to apply to his corn and soybean crops, and works with Freeborn and Steele counties to develop and implement manure applications to prevent fertilizer run-off and groundwater contamination.

He has also installed buffer strips and waterways to help control erosion.

Mike Kutzke, a teacher at Ridgewater College in Willmar, was the guest speaker at the luncheon, and he discussed the future of agriculture.

“To be successful in ag in 2022 you have to understand business and production,” he said. “You can’t have one or the other, you need both. And it presents a lot of challenges.”

During his speech, he emphasized that people’s priorities determine how they spend time, energy and resources.

To that effect, he emphasized the importance of connectivity in rural communities and asked the audience to connect young people in the community to agriculture. But he also admitted that people make decisions without thinking them through.

He wanted the audience to see the importance of seeing what they can influence.

“Technology is going to impact ag much more in the future than it has already,” he said, but he also emphasized the change wasn’t necessarily good or bad but simply change.

He stressed the importance of reaching out to young people where they were, whether that was through text or Tik Tok, and said you couldn’t expect young people to go to where you were.

While connecting, he implored his audience to have fun.

“Sometimes things don’t work out the way we’re supposed to, but can we still have some fun,” he asked.

“Sponsors are about connections, so you need producers, you need ag industry,” he said. “You need everybody combined and working together.

Kutzke grew up on a dairy farm and worked as a police officer in Moorhead for 17 years.