‘Just getting up on that mic, selling: it’s a lot of fun to do’ 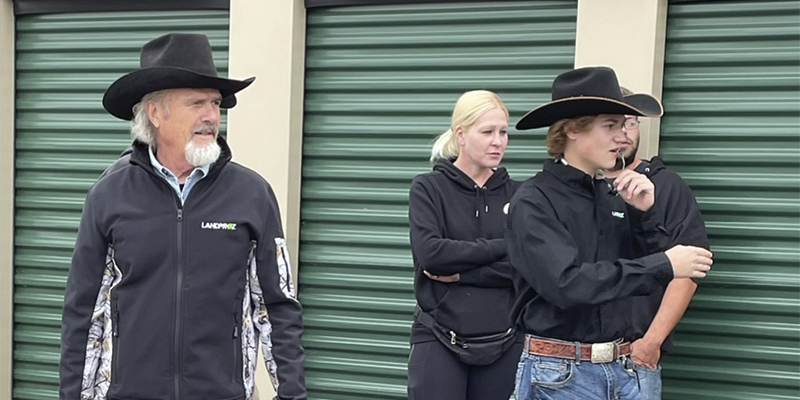 Sonny, right, and Greg Jensen, left, are a father and son duo that are carrying on the family tradition of auctioneering. Photos provided

Sonny Jensen thought he knew what he wanted in life.

Sonny, an Albert Lea High School senior, planned to be an attorney. He spent his free time as many young men choose to: playing guitar, hunting with his father and throwing the occasional fishing line. As closely as a teenager could have it, life was just about figured out.

Little did Sonny know, his bloodline had different plans for his future, and his true passions lied in wait of discovery. 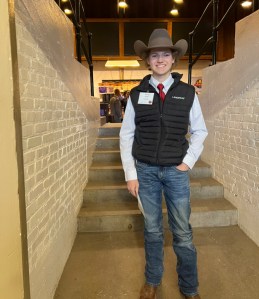 Sonny Jensen continues to the legacy of being an auctioneer. Photo provided

Since time immemorial, Sonny’s family has stood at the podium of Southern Minnesota land auctions. Sonny’s late grandfather, Howard L. Jensen, was a Freeborn County auctioneer in the ‘40s. Jensen was issued the first auctioneer license in the county’s history; decades later, when Sonny applied for a license of his own, he asked for and received his late elder’s license number, No. 24-01. Whether fate or luck or both, the future is bright—and starkly different from what initially imagined—for this Hayward teen.

Sonny is one of many in his family to call the Worldwide College of Auctioneering his alma mater: his brother, father and grandfather all graduated from the school. The family mostly sells farms at auction, with the occasional personal property, and Sonny says he hopes to venture into the auctioning of livestock someday.

Sonny attended the Worldwide College of Auctioneering in Des Moines in August of 2021. He was curious about the business that his family had been so dedicated to for two generations, especially after watching his father call bids. The action, the laughter, the noise and the energy of an auction piqued Sonny’s attention.

After attending the college and observing his dad, Greg Jensen, broker and auctioneer for the family business LandProz, Sonny determined that being at the podium would be “way more fun” than any courtroom.

“Just getting up on that mic, selling, it’s a lot of fun to do,” Sonny said. “There’s a lot of great people in the industry. It’s a pretty good community.”

Getting into the industry after auctioneering school, a weeklong program attended by people from all over the country, is “like going to three piano lessons and then trying to play Mozart,” Greg said. So much more goes into spearheading an auction than being able to talk fast and pulling off a ten-gallon hat: before the family business took off, Greg was responsible for writing his own newspaper ads, promoting himself on the radio and scouting out buyers, sellers and auction locations.

Now, LandProz has a full staff, including 65 agents across Minnesota, Iowa, Missouri, Wisconsin, Indiana and the Dakotas. Sonny got his auctioning license in January after turning 18 (“I’m pretty much an auctioneer now,” he said with a smile), and has been ringman for a number of sales already in the family business—all the while helping with social media marketing, pursuing his real estate license and attending high school.

Even with his family business’ support staff handling auction logistics, Sonny’s job is far from simple. In the realm of buying and selling, being a people person and a person for the people is paramount. A land auction can bring anxiety for buyers and sellers alike, and the auctioneer is the most important mitigator. Being “honest and upfront” is the best policy and a good auctioneer works as hard as they possibly can for the sellers, Greg advised his younger counterpart.

Despite all of its accompanying stresses, “our job is fun, it’s just damn fun,” Greg said. His son, who just completed his first farmland auction sale on Feb. 10, agrees.

“Our job is fun,” Greg explained. “The hardest part is accepting if you are not capable of doing this job. … It’s a blast, we laugh, we get the crowd laughing. A lot of times I get up in front of [the crowd] and have them laughing at me.”

An estimated 100-200 people carry auctioneer licenses in Freeborn County now, Greg said. Sonny has the potential to be one of the best.

“He does a great job,” father said as he looked on with pride at son. “He’s got a lot more talent than I ever had. He’s got what it takes.”

Sonny’s favorite experiences so far have been meeting people, and competitions. He participated in the Iowa State Auctioneering competition last month, where he was named the Iowa State Rookie Champion Auctioneer. His main goal is to “do my best for people.” His father added that Sonny will be “a good man and a good auctioneer.”

“I love meeting people and talking to them,” Sonny said. “… Everyone has a different story. I’ve met [a whole lot] of people just from going to two competitions and they’re all pretty unique.”

Sonny’s goals include winning the International Junior Auctioneer Championship later this year in San Diego, and “selling as much as I can.” His mother, Anna Rahn, said that Sonny is a lover of the classics—classic rock, classic country, classic cars. When he’s not working on starting a band, Sonny can be found practicing his chants—the lightning-fast talks that we most commonly recall when thinking of auctioneers—when driving down the road or doing chores around the house. He’s learning new things every day, closely observing his father, working on being a great auctioneer and an even better person.

And that is a classic Jensen family man.