Learning to speak a new language 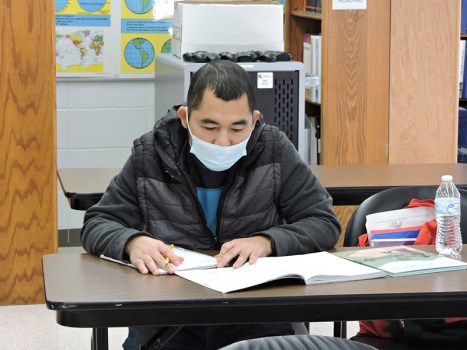 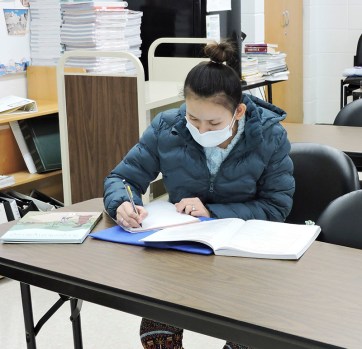 Sha Lay Moo, 20, was born in a refugee camp and didn't know any English before coming to the United States. She is now in the advanced English class at Brookside. Kelly Wassenberg/for the Tribune 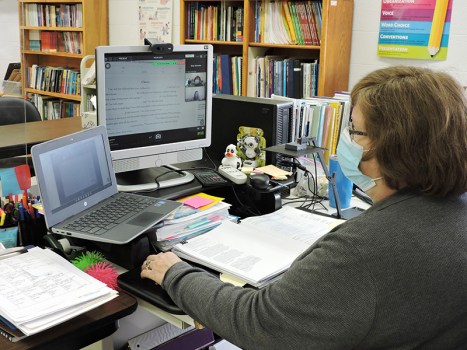 Betsy Schroeder has adapted her teaching methods to allow her to provide instruction for students over Zoom at the same time as students in the classroom. Kelly Wassenberg/for the Tribune

Though numbers have dropped during the COVID-19 pandemic, students press on in Adult ESL program

Rules are everywhere. They’re a way to ensure order over chaos. They let people know what is to be expected of them in certain situations.

Unfortunately, the English language doesn’t concern itself with rules.

“That’s what’s hard about English,” said Betsy Schroeder, English as a Second Language teacher in the Adult Education Center through Albert Lea Area Schools. “Every time English makes a rule, they break it. And that’s the hardest thing is that [the students] are just starting to learn a rule and then they run across something that breaks that rule.”

Schroeder and her students often laugh about it.

“Why do we make rules if we break them?” she said.

Schroeder has been an ESL teacher for 23 years and teaches the advanced ESL students.

Penny Jahnke, the adult education coordinator, said the program is serving 141 students from 16 countries covering 11 different languages — the most popular of which is Karen followed by Spanish. Students range in age from 16 and up, and their educational levels vary greatly.

Some come from countries in which women do not attend school and don’t even know the alphabet. Others have degrees in their home countries, but need a better understanding of the English language to be able to utilize that knowledge in a career here in the United States.

Most of the students are refugees, including Rau Htoo, 38, and Shay Lay Moo, 20.

Htoo is a refugee from Myanmar, who spent 10 years in a refugee camp before coming to the United States. This is in his second year of the program.

Htoo said his decision to come to the United States was based on the opportunities the country has to offer and was able to learn some English before immigrating to the country.

“America is a good place for refugees,” Htoo said.

Htoo is one of many who work full-time jobs on top of coming to class in order to increase his understanding of English in all its forms — spoken, written and read.

Moo was born in a refugee camp on the Thailand-Myanmar border. While she did receive an education, English was not taught at the camp. She works in the community and is learning English in hopes of getting a better job to help support her family. She has been in the ESL program for five years.

It takes a lot of dedication for ESL students to stick with the program.

Of those currently enrolled in the program, she reported 61% of the students work full-time jobs with many of the others staying at home to raise their children while their spouse works.

Regardless of their situation, the Adult Basic Education program tries to remove all the barriers it can by providing both transportation and day care assistance. Computers and mobile hotspots are also available so students can learn on their own time, as well.

Classes run Monday through Thursday from 8:30 to 11 a.m. and 11:30 a.m. to 1:30 p.m. Many students consistently make it to class, while it’s a struggle for those who work overtime at their jobs. Since COVID’s arrival, Schroeder said her class attendance has slipped from 16 to at times just a handful, but Jahnke said they are working on ways to accommodate. They are looking at providing night classes as part of a consortium and have been working on a high-flex model.

“We have students that are sitting at home, zooming in and watching class, while the teacher is also teaching a student sitting in front of her, and that has been very successful,” she said.

Flexibility is important as students must log between 40 to 50 hours of classroom instruction before they test to go up to the next level. There are six levels in total — three in the beginner classes and three in the advanced class.

“The immigration population is contributing to Albert Lea and Freeborn County,” Jahnke said. “They are filling jobs at our production plants. They are buying houses. They are having their children come to our schools. I only see positives about the people who are coming over here. They are hard working and very family-oriented.”

Say what? Grammar rules/exceptions for ESL

There are many common spelling rules most are familiar with, yet there are exceptions. When thinking of these rules, it becomes easier to imagine why a non-English speaker may have difficulty mastering the language. Below are just a few.