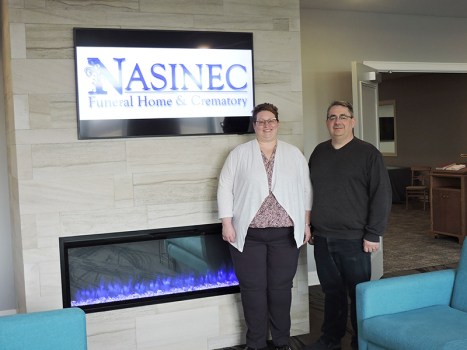 Susan and Nathan Nasinec owned and operated Bruss-Heitner Funeral Home for over 14 years before officially opening a newly constructed facility that bears their family name. Nasinec Funeral Home and Crematory opens as Susan Nasinec celebrates her 25th year as a funeral director and the couple's eldest son, Brandon, joins the business. Kelly Wassenberg/for the Tribune 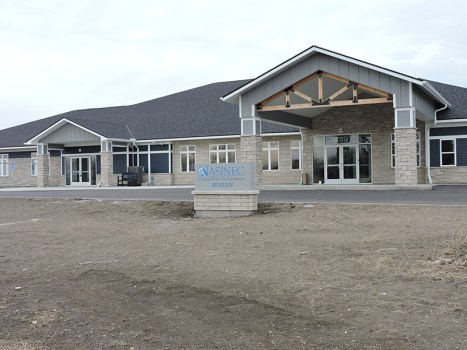 Nasinec Funeral Home and Crematory officially opened March 7 at 789 Business Park Drive in Wells. Located off Minnesota Highway 22, the facility includes an event center that can host events for 150. Kelly Wassenberg/for the Tribune 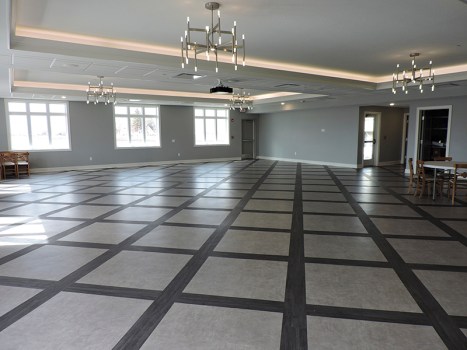 The event center is available for use for celebrations of life and funeral luncheons, as well as private events, such as anniversary parties or business events. Kelly Wassenberg/for the Tribune 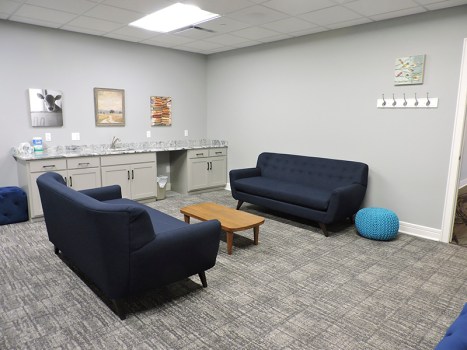 The family room is located immediately next to the funeral chapel allowing families a place to gather before the service and has a window so family members who may be attending to small children can still watch the service. Kelly Wassenberg/for the Tribune 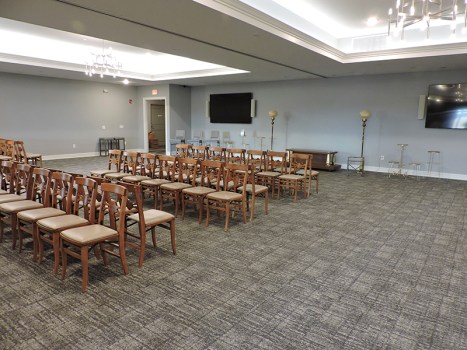 WELLS — After more than 60 years in operation, Bruss-Heitner Funeral Home in Wells has a new location and new name — Nasinec Funeral Home and Crematory.

Owners Susan and Nathan Nasinec decided to construct the facility after realizing the original location could not meet the evolving needs of the community they serve.

“We thought about maybe renovating the other funeral home’s site, but we’re landlocked,” Susan Nasinec said.

The price tag for modernizing the old building to accommodate up-to-date technology was considerable, and still would not have addressed other issues, including having limited off-street parking.

The new construction project, which rests inside the Wells Business Park on Minnesota Highway 22, solved the parking issue and added an on-site crematory and events center that can be utilized by families to host funeral luncheons or celebration of life services for those without a church affiliation. The center is also available for the public to use for private events.

Together with Miller Architects, the Nasinecs put everything they wanted into the new build.

“And we are extremely pleased with how it looks,” Susan Nasinec said.

How the space functions behind the scenes is equally important. Additional functional spaces including a designated family room, flower room, and viewing room were a part of the design.

The family room is right next to the chapel to provide a private gathering place for family before services are conducted. It can also serve as a place for children to be during the service. The flower room allows florists to drop off flowers to the facility by using a passcode at a side entrance, without having to worry about interrupting staff who may be with a family. While they can make deliveries, their access to the rest of the funeral home is restricted.

The private viewing room in the back allows families to see a loved one being brought into the facility when it’s not in their best interest to be too close to the body. This can be for numerous reasons, including the length of time between death and when the body was discovered. Since viewing the body can help families with closure, the Nasinecs wanted to add this feature to their facility.

The crematory can be seen through the same observation window.

Along with providing funeral services following the death of a loved one, Nasinec Funeral Home and Crematory also handles pre-need arrangements.

Nathan Nasinec serves as the business’ chief financial officer and insurance agent. He meets with clients with either his wife, or their oldest son, Brandon, who is finishing his education to become a funeral director. Together, they outline a person’s preferences while they are still able to communicate their wishes. Sometimes these plans are quite detailed, and sometimes they’re not. Either way, they can be helpful to those left behind.

“When there’s no plan in place, then it’s just hard, and it can be so overwhelming,” Nathan Nasinec said, noting that funerals typically end up being somewhere in between what the descendant wants and what the family needs.

By expressing one’s wishes in advance, a person can alleviate some of the stress from those left to make the final arrangements and can ease tension between family members who may have different ideas on what the descendant would have wanted.

Prior information collection alone can be of great assistance to grieving families.

When working with veterans, the funeral home will ask for the required paperwork needed for a military funeral in advance. Information needed on the death certificate, such as a mother’s maiden name, or details that are typically listed in one’s obituary, including personal and professional achievements, can also be provided.

Another important aspect provided by the funeral home is education.

Susan Nasinec recently celebrated her 25th anniversary of being a funeral director. During those years, she’s gained insight into the grieving process, which she shares with clients by meeting them where they are. That can be especially crucial with the youngest of those who are grieving a loss. She knows how significant that piece can be from firsthand experience.

Susan Nasinec said she was 10-years-old when her dear friend Bobby Anderson was killed in an accident. The first time she ever remembers seeing her father cry was when he told her the news of his passing.

“I remember him taking me to the funeral director in Owatonna and just saying, ‘I don’t know how to answer her questions.’”

The man was patient and explained that accidents happen and sometimes have grave consequences. He took things one step further with every question she asked and showed her a few things at the funeral home when she prodded further.

“I apparently asked a ton of questions, like just a ton,” Susan Nasinec said.

While they weren’t easy questions for a father, the funeral director knew how to explain things in terms that she could understand, and her confusion was soon replaced by intrigue.

“I was hooked. I wanted to help someone. I was like, ‘I want to be a mortician.’”

While the funeral director has since passed, the influence of his words lives on. Bobby’s memory lives on, too. Susan Nasinec still refers to him as her angel, and his mother will be in attendance at the open house celebrating the new facility. The event will take place from 10 a.m. to 6 p.m. April 2 at 789 Business Park Drive in Wells.