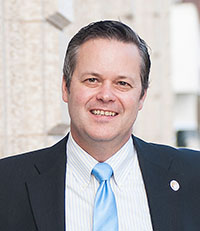 Benda, who has been active in the Freeborn County Republican Party over the years and previously ran for the House District 27A seat, has served as chairman of the Albert Lea-Freeborn County Chamber of Commerce, as a member of the Albert Lea Economic Development Agency, as a 4-H youth leader and as chairman of the St. Theodore Catholic School board, among other endeavors. He has also represented the Shell Rock River Watershed District as legal counsel over the years.

“Just a little over a year ago, Joe Biden and the Democrats assumed full control in Washington and what have they given us?” Benda said. “Four dollars-a-gallon gas, grocery prices through the roof, crime and destruction in our cities, big government mandates that closed our schools and imposed requirements upon our teachers to indoctrinate instead of educating our kids. We can, and must do better.”

Benda said he got involved with politics as a youth with his father and has been a part of Republican politics ever since, attending county and district conventions and building relationships with others in the party.

“Morally and fiscally the country right now is on the wrong path,” Benda said. “I just felt like if leaders were going to step forward — good, conservative, common sense leaders — if there ever was a time, this is it.”

Benda was born and raised on his family’s farm in Alpha, and he and his family have deep connections to Minnesota’s agricultural community. During his 25 years as an attorney, he has worked shoulder-to-shoulder with farmers, families and small business owners to help them succeed.

Benda said the 1st District is the state’s agricultural breadbasket filled with hardworking people farming the land, running main street businesses and saving lives with world-class health care. He said if elected, all of his decisions would be made keeping in mind what’s best for residents of the district.

He said in addition to agriculture, small business and world-class health care, the other pillar of his campaign is energy independence. He said while there is an abundance of energy options in the 1st District, whether nuclear, wind, solar, ethanol or biodiesel, the country as a whole can do a lot more.

“We gave up energy independence when we shouldn’t have,” he said.

Looking back over the last two years of the COVID-19 pandemic, he said he feels there has been a heavy-handed approach implemented through mandates and requirements, which he described as “clearly over the top.” He also said he thinks there should have been more reliance on health care experts such as Mayo Clinic and Sanford Health to advise the country instead of institutes funded by foreign governments not regulated by Americans.

“What happened was overreach, and I think we need to make sure it doesn’t happen again, that we don’t overreact the way we did,” he said.

He said as a country, people need to take a deep breath and think about what has happened with COVID, what is happening with oil prices and food inflation and the potentials around the world.

“I think we really need to put our best team out there,” he said. “I’m only going to be one of many, but good Minnesota common sense can go a long ways.”

To help small businesses grow, Benda said those elected need to find ways for businesses and the government to work together. He also referenced government regulations and permitting requirements and rewarding the entrepreneurial spirit instead of stifling it.

He said he believes firmly in protecting the sanctity of life and defending the Second Amendment.

Regarding the current Russian invasion of Ukraine, he said he thinks President Joe Biden has had it wrong and that he also had it wrong with Afghanistan.

He said he thinks the U.S. should do more to help Ukraine preserve its democracy, and should take a stronger approach with Russian President Vladimir Putin.

When asked what sets him apart from other candidates, Benda said he thinks his lifetime commitment and time in the district gives him a heads up, along with his skillset as an attorney and negotiator.

He said he won’t back down from fighting for 1st District values and is ready to find constructive solutions to the challenges facing the state and nation.

Benda and his wife, Heather, a certified public accountant, have been married for 22 years and have two children. He has twice been named Attorney of the Year for his work in the community and previously served as chair of the Minnesota State Bar Association’s Agricultural Law Section Council.

The filing period for the open seat is open through 5 p.m. Tuesday.

A special primary will be held on May 24, followed by the special election on Aug. 9 — the same day Minnesota will hold statewide primary elections — within the 1st District’s current boundaries.

Candidates for the special election will likely run again in the November election, which will decide who will hold the seat in the next Congress under Minnesota’s new political maps released last month.

As of Friday afternoon, eight Republican candidates, six DFL candidates and one Legal Marijuana Now Party candidate had filed for the open seat.

Candidates are the following: