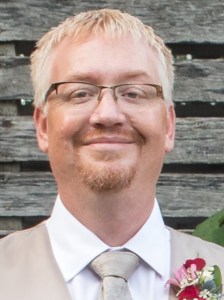 Matt was born on October 20, 1977, in Albert Lea to Glen and Paulette (Zabel) Beckmann. He attended Ellendale Elementary School until the schools merged and graduated from NRHEG High School. After graduation, he attended Riverland Community College in Austin while working full time in Owatonna.

On September 1, 2001, he was united in marriage to Diana Foster, and in 2004, the two welcomed their only son, Evan. The family lived for a short time in Albert Lea, but eventually moved to Hartland. To Matt, small-town living was important and was a big part of his identity.

While living in Albert Lea, Matt worked at Indy Lube as an automotive mechanic. After moving to Hartland, he worked briefly for New Richland Auto Repair before becoming a maintenance director at the New Richland Care Center. There, he loved interacting with the residents, and they loved him. Matt eventually went back to work at New Richland Auto Repair, where he served the community for over 15 years.

Matt was very social. He enjoyed driving around visiting people and striking up conversations with others as they worked outside. He loved helping people, especially with yard work. He enjoyed fishing, working on vehicles, and chopping wood. But his most favorite thing to do was to spend time with Evan. Matt was very involved in Evan’s life, attending his football and baseball games, track meets, and taking him fishing. They loved working on vehicles together and the garage was their sanctuary. He was known to be a collector of Minneapolis Moline and Coca-Cola memorabilia. Matt was a kind-hearted soul. His compassions didn’t end with people. They extended to the animals of the neighborhood; often offering treats to the neighborhood dogs, recusing baby bunnies, and caring for “garden cat” as his own.

Surviving Matt is his son, Evan; his mother, Paulette; his siblings: Mike (Holly) Beckmann, Michelle (Mike) Beckmann, and Marlin (Laura) Beckmann; his nieces and nephews: Elias, Eliana, Adrianna, Morgan, Payden, Lukas, and Nathan; along with many aunts, uncles, and cousins.

Preceding him in death was his father, Glen; and grandparents: Gerald and Jean Beckmann, and Alvin and Eleanor Zabel.