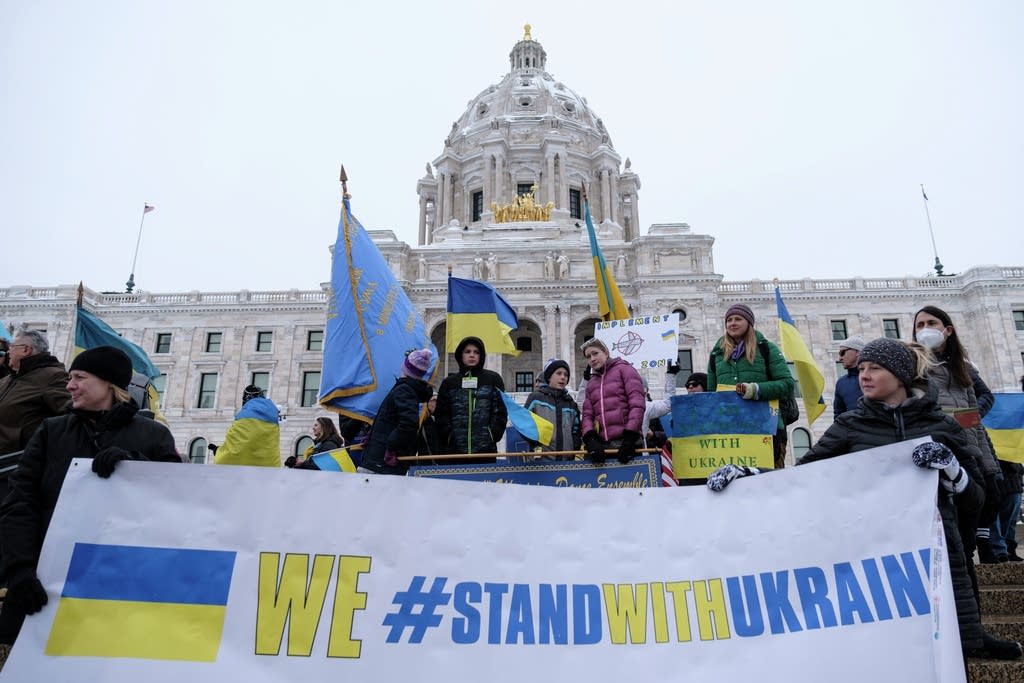 Supporters of Ukraine hold a banner and signs in front of the state Capitol at a Stand with Ukraine Rally to condemn Russia’s war in the country on Sunday. Tim Evans for MPR News

The Ukrainian national anthem rang out from the steps of the Minnesota State Capitol Sunday as hundreds gathered to stand in solidarity with the people of Ukraine.

Minnesota Gov. Tim Walz spoke to the crowd after an earlier proclamation that the state condemned what he called Russia’s “unprovoked and unlawful invasion of Ukraine.”

The rally brought together a cross-section of groups and faiths. The crowd heard prayers from Ukrainian Orthodox and Catholic priests and a Jewish rabbi.

Liliia Muslimova is from Crimea, the Black Sea peninsula that Russian forces invaded and annexed in 2014.

Dmitriy Pogorelsky is a native of Russia. He said he opposes the invasion, and was among those in the crowd who demanded that western countries take stronger action.

“No fly zone. There is only one option,” he said. “Without this, [the] Ukrainian people of course win the war, but it’s much harder for Ukraine to defeat Russia.”

Lawmakers in both major U.S. parties oppose a no-fly zone. They believe it could further provoke Russian President Vladimir Putin and spark a wider war.