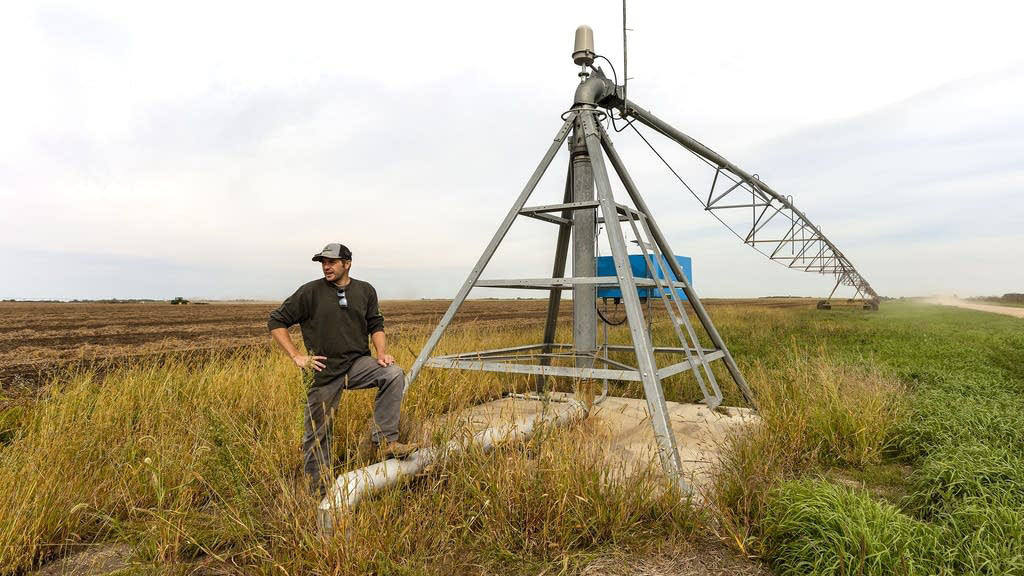 Glenwood farmer Jake Wildman utilizes a center pivot irrigation system on his Pope County farm to ensure his crops receive water when there are dry spells and droughts in September 2021. Paul Middlestaedt for MPR News

The Minnesota House passed a bill on Thursday that would spend $5 million to reimburse eligible livestock farmers and specialty crop producers. Another $5 million would go to the Rural Finance Authority Disaster Recovery Loan Program. The vote was 101 to 33.

DFL Rep. Mike Sundin of Esko, the chair of the House agriculture committee, said many farmers need the help.

“As summer turned into fall, thousands of Minnesota farmers experienced real economic setbacks because of the drought. But some had it much worse than others. This bill provides a much needed lifeline to those who provide our most basic need, food,” Sundin said.

Rep. Paul Anderson, R-Starbuck, voted for the bill but said he thinks it’s too small.

“If the grants awarded are each $10,000, it would give this financial assistance to 500 farmers here in Minnesota, which is really a small percentage of those who suffered losses from last year’s drought,” he said.

The bill also includes money for the Department of Natural Resources for drought-related purposes, including the replacement of seedlings that were lost. The agriculture committee in the Senate has also advanced a drought-relief bill.