Officer recognized for work to save man’s life

When the moment arrives, it helps to be prepared.

Such was the case for Albert Lea Police Department Patrol Officer Megan Evers, who happened to be at the office mid-morning Feb. 13. 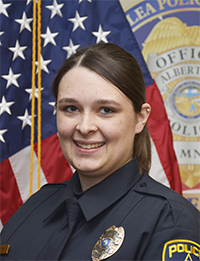 “A call went over the radio for a male down in front of the Legion and that CPR was started by bystanders,” she said.

After she first heard there was a person experiencing cardiac arrest and that bystanders were on the scene helping, she grabbed an automated defibrillator and went to help.

“It was a welcome sign to see those bystanders doing CPR [and taking] some of the job responsibilities off of me, so I knew that my next step was to get the AD hooked up,” she said.

After running the AD (which advised her to shock the victim), CPR was again administered and she delivered more compressions while bystanders assisted.

“I didn’t have to worry about compressions and hooking the AD up at the same time,” she said.

An ambulance and members from the fire department then arrived and, after more treatment, a pulse was registered, at which point the victim was transported to the emergency room and later to Rochester for further care.

“When I stepped back and the paramedics and the fire department took over care for the man … I realized that the second bystander was actually (Sheriff Kurt Freitag), who was off-duty at the time,” she said.

Because of the experience, Evers learned that — when needed — community members are willing to help do whatever is needed, whether with CPR, clearing a path for an ambulance or even contacting family.

“It just shows how great the community is,” she said.

And that unselfishness and allowing victims to spend more time with family is why she first wants to be an officer.