Phyllis Jeanne Reiter, 94, a classically trained soprano, member of Beta Sigma Phi, proud daughter of Pawnee City, Neb., a beloved wife, mother, grandmother and great-grandmother, fierce believer in what was right and kind, and a woman who never met a stranger and had a laugh that lit up every room, died Saturday in Clive. 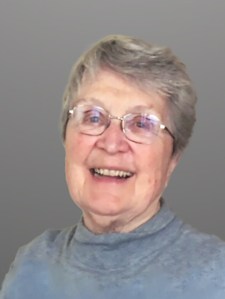 She was born September 29, 1927, in Pawnee City, to Albert and Ethelda Porr, parents whose deep love for their daughter defined her own life. She was funny and smart, clever but kind, a beautiful woman whose prettiness paled in comparison to her inner-grace — a vast well of love and joy and jokes and wisdom and strength that marked her life, and shaped those lucky enough to be a part of it.

It was no easy thing, trying to conjure up a man worthy — and capable of wooing — someone as sharp as the young opera singer living in Chicago after World War II. Enter, by God’s beautiful work, William “Bill” Reiter. He courted Phyllis and won her hand, the beginning of a long, lovely life together. They had seven children, 17 grandchildren, 25 great-grandchildren and a 64-year marriage that reminds all of us true love is real.

As an only child who had longed for a large family, Phyllis got just that: Her seven kids were, like their mom and dad, funny and feisty, adventurous and kind, tough and, yes, often steely-eyed in their self-confidence and resolve. Phyllis, a mother who poured her love and positivity into the house she ran, joked, “I feel like I’m the CEO of a small corporation and every one of my members have been trying a hostile takeover all day.”

Those same kids carry their mother’s legacy — her humor, her moral compass, her kindness, her strength and sense of right and wrong, that touch of quiet and clear wisdom dispensed in good times and bad. Her legacy lives on with them — a doctor, nurse, teacher, pastor, successful businessmen — and their own kids and grandkids.

Phyllis and Bill moved to Des Moines in 1979, where they were members of Sacred Heart Catholic Church in West Des Moines. She will be deeply, deeply missed, but her family is consoled by the fact she is reunited with her true love, where both are together again, now in the Kingdom of God.

The family has respectfully requested that memorial contributions be made to: Sacred Heart Catholic Church. They may be mailed to: Iles Funeral Home; C/O The Phyllis Reiter Family; 6337 Hickman Road; Des Moines, IA 50322.

The service will be live streamed for those unable to attend. A link will appear on Phyllis’s obituary page, just prior to the service, at www.IlesCares.com, where you may also leave online condolences.