Residents worried about increases at the gas pump 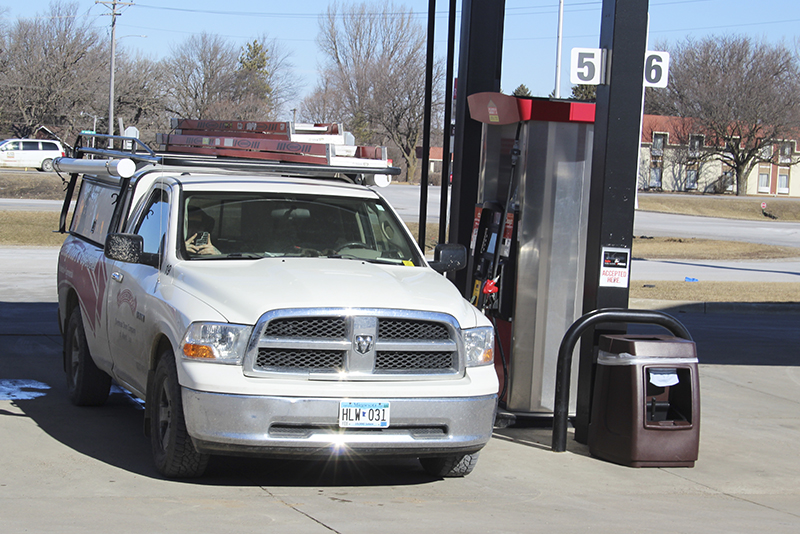 A work van fills up at the Casey's on Main Street in March. Alex Guerrero/Albert Lea Tribune

Gas prices continue to rise amid geopolitical tensions between Russia and the West. According to gasbuddy.com, the cost per gallon in Minnesota rose another dime from yesterday’s average.

According to Glenda Erickson, store manager at the Casey’s on East Main Street in Albert Lea, the average gallon was less than $3 at the turn of the calendar year. While Casey’s on Tuesday was at $3.99/gallon for 87 octane, the average price in Minnesota stood at $3.90 as of Tuesday morning.

Erickson said the average could reach $4.25/gallon by Memorial Day.

According to GasBuddy, the highest rates in the city on Tuesday were $3.99/gallon (Kwik Trip and the Petro station), while Love’s Travel Stop was selling for $3.89.

And those rising prices have impacted store sales.

“Less people getting gas,” she said.

She’s also seen an uptick in customers coming up to her with complaints and questions, a lot of them related to the conflict in Ukraine and the U.S. decision to ban Russian oil imports.

She believes that decision could cause the price of gas to soar to $5/gallon in July or August, but speculated that because the U.S. plans to tap into its own 30 million barrels of oil reserves the price hike could slow.

She said she understood where Shell was coming from after the company bought Russian crude oil last Friday.

“They’re probably just trying to cover their assets with their company of gas to where they want to make sure that they have enough to stay afloat,” she said. “But in the same sense, you’re kind of playing with the enemy. So you might make enemies.”

On Tuesday Shell announced it would phase out Russian oil and shut service stations in the country, and in a later move President Biden announced a ban on all Russian oil imports.

And with all these oil companies no longer doing business with Russia, prices will continue increasing. And that, in turn, will mean Erickson has to deal with more angry customers

Erickson also admitted she didn’t think the cost of a gallon would ever dip below $3.

“The way this day and age is, kind of not really,” she said.

Aaron McVicker was at the gas station and said the country needed to be more dependent on North American fuel sources.

“Unfortunately I don’t think we’ve seen the tip-top of this,” he said. “I think it’s only going to get worse before it gets better.”

McVicker himself sells cars and said the price of fuel was a big reason why vehicle costs are going up.

“I live in-between two refineries that make the gasoline and I can’t understand it myself,” she said. “There’s absolutely no reason with two refineries right there within a 25-mile period from where I live that the gas prices should be so high.”