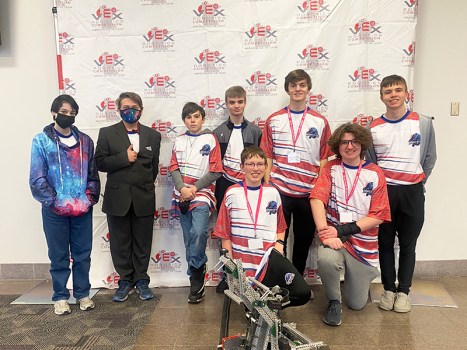 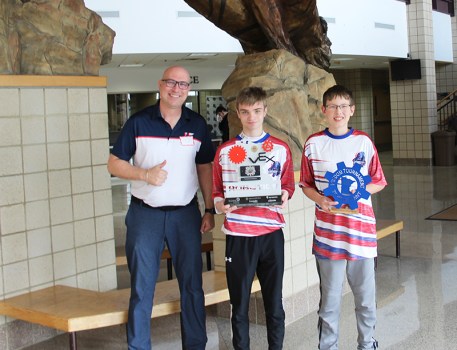 Robotics team coach Burke Egner stands with students Easton Hillman, center, and Ty Youlden. After advancing to the semifinals in the state competition, the team will now move on the Worlds, which will be held in Dallas in May. Alex Guerrero/Albert Lea Tribune

Some teams at the high school have seen their season come to an end. But for one — the Broken Zip Ties — their season is far from over.

That’s according to Burke Egner, head coach for the high school’s robotics team, otherwise known as the Broken Zip Ties.

Prior to this academic year the school had a program called First Robotics before transitioning over to VEX Robotics. But for Egner, it made sense to transition over to VEX as that was what students at the middle school were using. In fact, it was Egner who introduced robotics to the middle school after joining the district as a teacher in 2017. And when he joined the district, he was given an opportunity to start robotics and video game design classes, where he formed the club as an off-shoot of those classes.

“I’ve always had an affinity for robotics and engineering,” said Egner, who has a bachelor’s in information management and computer science.

In fact, he admitted as a child he would take things apart and then put them back together. That led to building custom computers and PCs.

“VEX Robotics is a little bit more approachable,” he said. “You don’t have to have quite as much engineering detail, welding, those kinds of things.”

According to Egner, the VEX program is also cheaper to run.

Their first year, he and his students qualified for state competition at the middle-school level.

This year, Egner’s students had to create a robot that could gather mobile goals and place them on their side of a field, stacking them on a balancing platform. Bonus points were given for collecting purple rings and stacking them on pillars.

“That was a big challenge for us this year is to try to figure out how to stack these purple rings on these goals,” he said.

But it was a challenge they not only passed. They aced it by winning a regional tournament to qualify  for state competition. That competition, two-days and 60 teams, happened last week in St. Cloud.

They did so well they — along with their partners out of New Elm — placed as a semifinalist. And teams that placed in the finals or semifinals were invited to a world competition, which will be May 5-7 in Dallas. According to Egner, 800 teams from around the world will be at that competition.

“This is a once-in-a-life-time opportunity for these kids,” he said.

Freshman Ty Youlden, who was on that first team, has been with the robotics team since sixth grade.

Being on the team, he’s learned coding as well as build and design.

Youlden plans to stay with the team throughout high school and said the experience can help him in his future. Youlden is considering a career in engineering or design.

“I would have most likely (joined the middle school team) since I’ve always desired to be a video game designer, something along the lines of video games when I get older,” he said.

So joining robotics and learning programming, he felt, would help.

“Just the teamwork and taking ideas and doing my best to implement them, along with troubleshooting and meeting deadlines, are all valuable skills I could see using in my future,” he said.

Currently there are eight students on Broken Zip Ties: Youlden, Hillman, Rice Boetcher, Noah Anderson, Gabe Giebel, Maxx Richards, Paul “Kenny” Hillman and Brecken Koepke. Each member has his own role, with a three-person driving team, coders who help with building and a documenter.

It’s Egner’s hope that the program can become a natural progression for students from middle to high school.

To that effect, he’s presented to elementary students when they come to visit.

He also wanted to thank the administration for helping his team get to state as well as his current students for the work they’ve put in.

And in case you’re wondering, according to Egner the students came up with their name.