‘She loves working with kids’: Lake Mills woman has volunteered at sports games for 41 years 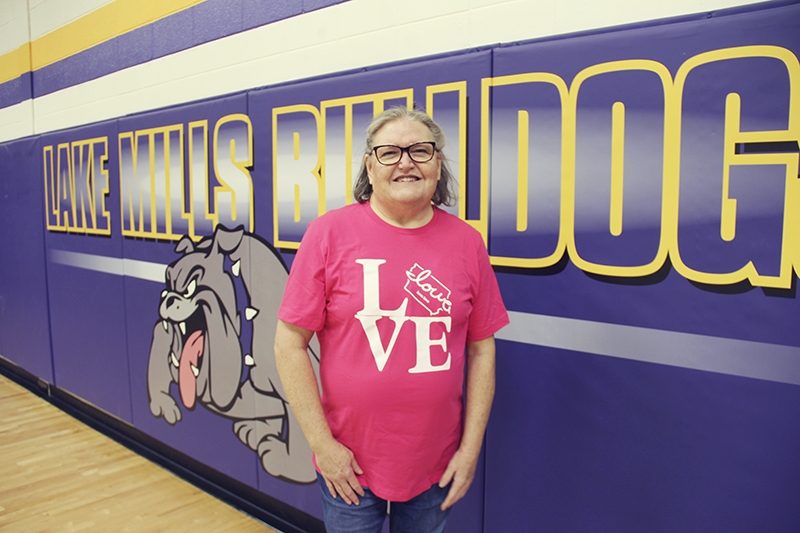 Donna Lair of Lake Mills has volunteered for sports programs in both Forest City and Lake Mills for a combined 41 years. In early February she was honored in-between games with a “Friend of the School” award for her service from the Iowa High School Athletic Association. Sarah Stultz/Albert Lea Tribune

LAKE MILLS — A woman who was recognized in early February for her volunteer efforts with the Lake Mills sports program said she enjoys volunteering because it is a way to give back to the youth in her community.

Donna Lair said she started volunteering 41 years ago when she worked as a teacher in Forest City. At that time, teachers were required to volunteer at two events for the school, so she got involved — not only with the two required events but many others.

When she came to the Lake Mills district, her volunteer efforts continued and she signed up to volunteer at all of the middle school games.

“It kept me in touch with the kids,” she said.

She was a special education teacher and didn’t have many of the other students in her classroom.

“It was a good way for me to get to know them and get to know me for something other than as a teacher,” she said.

Lair said she left teaching for a few years and cooked at the Turtle Dove Teahouse in Albert Lea before returning as an on-staff substitute teacher and then a learner assistant. The volunteering, of course, resumed, too.

“It was fun still to get to know the kids,” she said.

Though she took another break three years ago when she had a liver transplant, she has since returned and is still involved in numerous activities.

“Donna has been one of our most important event workers over the years as she has volunteered to work at a number of middle school events,” said Lake Mills Athletic Director Jim Boehmer in his application to the Iowa High School Athletic Association for Lair’s award. “These are often the toughest jobs to fill.”

Boehmer said Lair has been willing to do any job from being the official scorer of a basketball game to being the announcer at a wrestling meet and jobs in-between.

“She loves working with kids and providing them with opportunities to participate,” he said.

Lair said she had no idea she was going to be given the award and came to the game Feb. 1 after Boehmer called and asked if she could help at a varsity game that evening.

“I figured there must be something he needed me to do, or he couldn’t find somebody else,” she said.

Between the games that night, he started talking about the award and then the next thing she knew, he called Lair to come down and receive the award.

Though Lair retired in 2017, she can be seen at the school at least a couple nights a week, depending on how many home games there are that week.

Other involvement in the community

Lair’s volunteer work at the school continues into other areas in her life, as well.

As a member of Asbury United Methodist Church, she has served on the Staff Parish Relations Committee for 15 years, is the church council secretary, taught Sunday school and has been a part of the church’s Thanksgiving meal committee, which served a meal to over 250 people last year on Thanksgiving.

She is also the site coordinator and on the national board for Sheltered Reality, a drum group that aims to put good back into the world.

She has also been involved in the Mills Players, Lake Mills’ community theater group, and hopes to get the group revitalized again.

Before Lair got married 36 years ago, she said she had a breakdown in her classroom. She dealt with many emotional kids, and she said one day she walked in and started crying.

She went and got some therapy, where she was reminded to make herself a priority, too.

She was clinically diagnosed with depressive tendencies.

“When I find myself going there, giving back to others it really brings back more to you than you could ever realize because I’m concentrating on other people, not on me,” she said.

She reminded people that volunteering doesn’t have to be a big time commitment — it could involve working at a food shelf two hours once a month, reading to children at a school once a week, making mittens or starting a food drive.

“It’s finding a need and seeing how you can do something about it,” Lair said. “It’s addictive.”

Lair and her husband, Lynn, have one daughter, Kelli, who graduated in 2010.