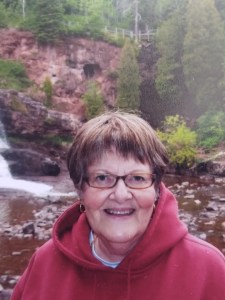 Susan Andra Baker was born on May 22, 1943 to Steve and Emma Baker in Decorah, IA. She grew up on the family farm five miles west of Decorah and attended school in the one-room school house that was just a mile from the farm. She graduated from Decorah High School in 1961, and from Luther College in 1965 with a BA in Music and Physical Education. In 1990 she received a BA in Mortuary Science from the University of Minnesota.

Sue married Robert Micklick and they had two children, Jill and John. They lived in Conifer and Evergreen, Colorado, as well as Decorah and Clear Lake, Iowa with many close-knit relationships to extended family and friends. She worked and supported her family through her private home cleaning business, and later as a funeral director when they moved to Albert Lea.

Sue enjoyed many hobbies, but she was most known for her cooking and baking, especially her holiday dinner rolls. She also loved to sing and play piano, sew and knit, can and preserve, read, play sudoku, and host friends and family for wine and dinner parties. She will be fondly remembered for her generosity, upbeat attitude, sense of humor, and unconditional love for her family, friends, and neighbors. Sue was a member of Salem Lutheran Church in Albert Lea, and her faith was very important to her. She also cared deeply for animals and was a frequent garage sale treasure hunter/thrifter.

Sue is survived by her son, John Istad of Duluth, MN; her sister Alice Vieyra (and husband Richard); nieces and nephew, Lisa Haggas (and husband Tim and daughter Judy), Jade Vieyra (and partner Sandy Greenberg), Steve Johnson (and wife Jodi and son Bryce); and multiple cousins on both sides.

Sue was preceded in death by her parents, her sister Barbara, her daughter Jill Buley, and her son-in-law Paul Buley.

A celebration of life will be determined at a later date.