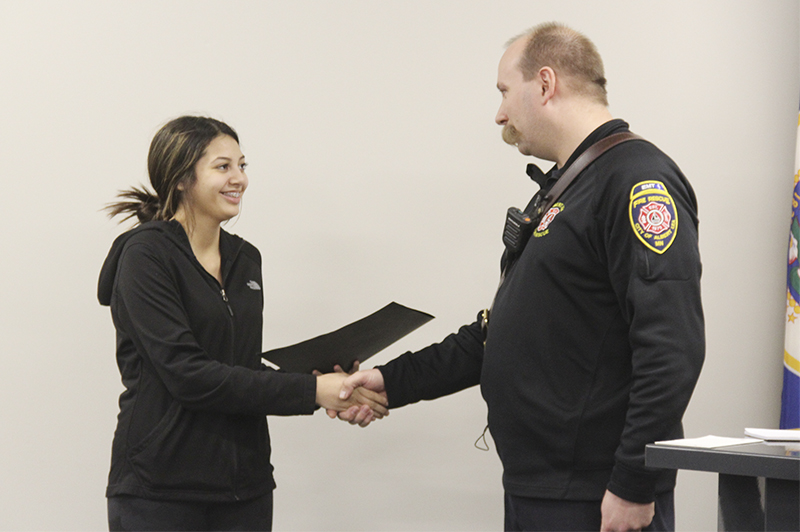 A 14-year-old Albert Lea girl was recognized Friday with a special award for her quick actions to get her friend and young sister to safety after a fire started in their mobile home on Gene Avenue earlier this year.

“We don’t see this very often with someone your age … This is a tremendous thing,” said Albert Lea Public Safety Director J.D. Carlson. “People go a lifetime without making a difference in somebody’s life and you definitely did that day.”

Calderon-Medrano said her mother, Rosa Calderon-Medrano, had woken her up the morning of Jan. 29 to make sure she would watch over her 1-year-old sister when she left for work at 6 a.m.

The teenager woke up her friend, who was also at the house, and they went into her mom’s room, and her friend fell back asleep. She said she tried to go back to sleep but she couldn’t and started hearing crackling sounds.

At first she ignored the sounds, but then she noticed smoke coming into the room.

She got up and went to her bedroom where the curtain and part of the wall were on fire.

She woke up her friend, picked up her sister, and they ended up on the porch. She called her mom while her friend called 911.

Soon after, they went outdoors, and when her mother arrived back home a few minutes later, she found them huddled in the driveway and firefighters extinguishing the flames.

The teenager said she didn’t realize until after the fire that she had saved her friend and sister’s lives.

“In her head she just did what she had to do,” her mother said. “She doesn’t look at herself as a hero. She doesn’t know what she really did.”

She said if she was in the same situation, she didn’t know if she would have been able to respond the way her daughter did.

Firefighters said when they arrived at the house the whole room was engulfed, and flames were coming out of the windows.

“We lost everything in the fire,” Rosa Calderon-Medrano said, though they are grateful they were all able to walk away unharmed.

The mother said the situation has helped the family realize the importance of an exit plan in case of fire in their homes. Kalia credited the fire safety she learned at school.

“Everything you learn in school, comes in handy,” she said.

The mother and daughter said the fire started because of an electrical problem.

The family is presently living in an apartment with plans to move into a house in the near future. They continue to pick up the pieces as they restart their life.