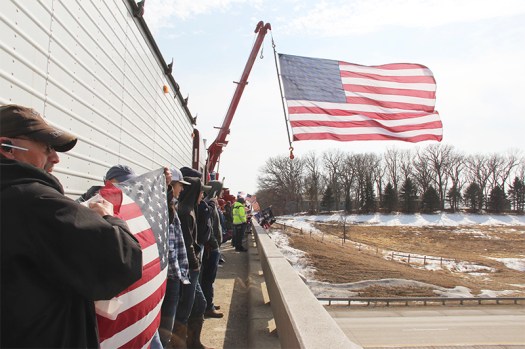 The large flag of T&W Towing flew off the Interstate 90 overpass bridge on Freeborn County Road 45 as the People's Convoy came through the area. Sarah Stultz/Albert Lea Tribune 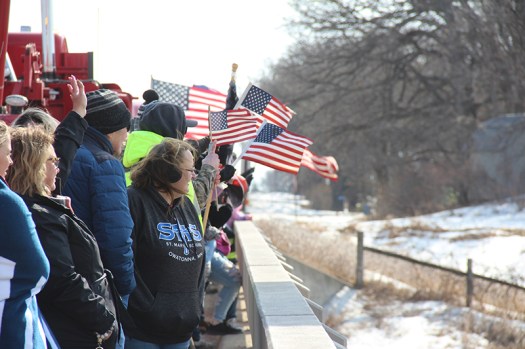 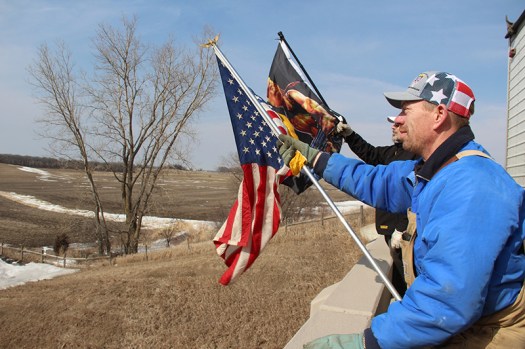 Many of the people standing on the Freeborn County Road 45 waved American flags. Some had other flags, as well. Sarah Stultz/Albert Lea Tribune 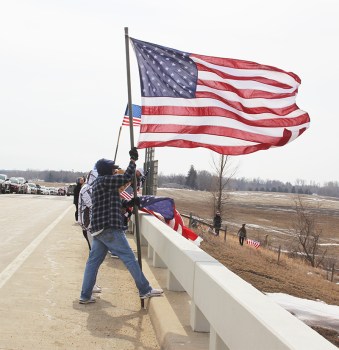 Supporters of the trucker convoy lined over the Interstate 90 overpass on Freeborn County Road 20 well before any trucks in the convoy showed up at the Petro station in Albert Lea. Alex Guerreo/Albert Lea Tribune 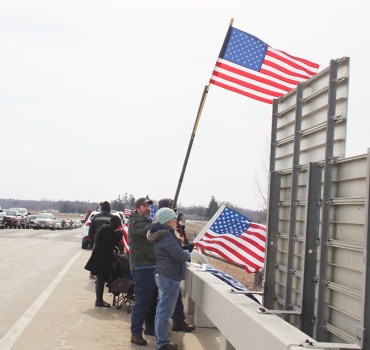 Supporters of the trucker convoy lined over the I-90 overpass well before any trucks in the convoy showed up at the Petro station in Albert Lea. Alex Guerreo/Albert Lea Tribune 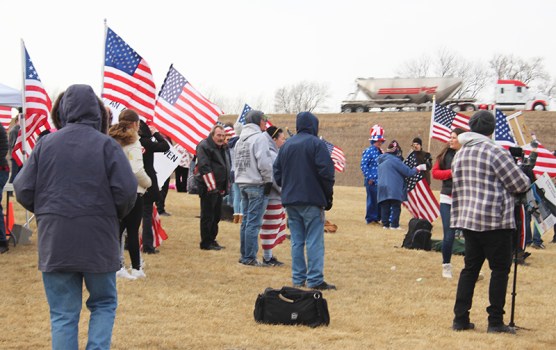 While organizers didn't get the number they had hoped for, a large number of supporters showed up at the Petro station to support the truck drivers. Alex Guerreo/Albert Lea Tribune 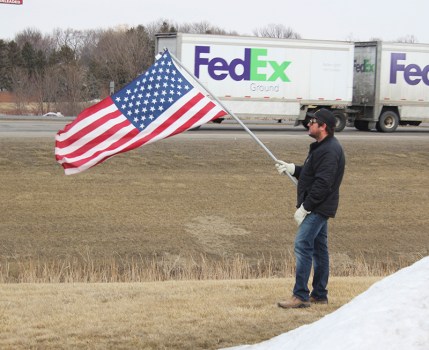 Many of the supporters carried flags as well. Alex Guerrero/Albert Lea Tribune 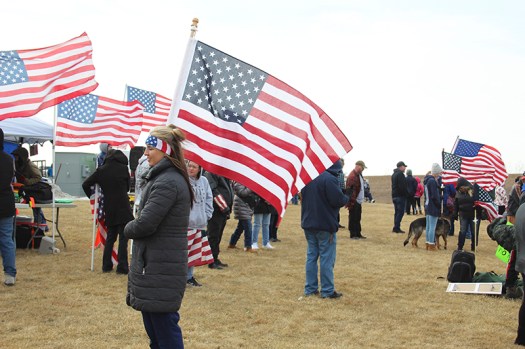 Many of the supporters for the drivers participating in the freedom convoy wore patriotic clothing. Alex Guerrero/Albert Lea Tribune

If you thought the Petro stopping area seemed unusually busy Friday afternoon, your eyes weren’t playing tricks on you. That’s because a convoy of trucks was there to grab lunch, and a number of local residents were there to show support.

The convoy was headed east to the nation’s capital to protest COVID-19 regulations in the country, similar to when Canadian drivers held protests objecting to pandemic rules last month.

“The truckers decided to do it,” said Keith Haskell, an organizer for the rally, which started earlier this week in Washington state. “They’re the ones that stood up for everybody to call our freedom back, and that’s one of the things that’s very important to me.”

Of significant importance to him was ending a COVID-19 mandate, something he argued would kill the supply chain and kill industries.

He was also surprised by the turnout, as he was expecting more people. But he admitted with the weather and strong winds, he was happy with everyone who showed up. Participants came from Iowa, South Dakota and North Dakota.

He also wanted leaders to see the convoy was a peaceful demonstration to argue for the end of mandates, lockdowns and what he called “unconstitutional tyranny” over people’s rights, freedoms and liberties.

“I hope that people in all of our capitals, not just our nation’s capital but our state capitals, realize that this is peaceful, this is a demonstration.

“It’s a protest and we’re all just saying we’ve had enough of these mandates and lockdowns and unconstitutional tyranny over everybody’s rights and freedoms and liberties.”

Steve Lemake, an Albert Lea resident, has been driving trucks for over 20 years and was on the same I-90 overpass to support the drivers.

“I’m opposed to everything that this president that we have is doing right now,” he said.

Lemake argued President Biden was against everything the country stood for, and argued it was obvious Biden wanted to destroy America.

“We all have rights, and they don’t care,” he said.

Mike Nagel has been using a truck as part of his business and was participating in the rally that started in Oak Harbor, Washington.

“I’m sick and tired of the government overstepping their bounds,” he said. “That’s the only way that I know of to express myself back in D.C.”

He described the trip as going well, and said there’s been a lot of support.

“[The convoy] is already achieving some hope, I can see that,” he said. “I hope that the government sees the other 90,000 trucks that are going to be there … and hopefully we’ll change things.”

Farmer Mark Wicks came from Montana and argued the convoy was fighting for everybody’s freedoms, including nurses and EMS who faced vaccine mandates.

“I want to show Washington that we’re paying attention to what they’re doing and they need to shape up and start listening to what we want,” he said.

He was also happy with the turnout.

Ray VonAhn is a retired truck driver from Iowa who joined the convoy in Alpha.

“Our country’s in bad, bad shape with the leadership that we have,” he said. “If we don’t get it stopped now, we’re not going to have a country left. It’ll be like Russia.”

He called the experience “mind-blowing,” and wants the country to adopt voter-ID and picture-ID laws for voting, and argued if the laws aren’t passed, the U.S. would never be free.

This wasn’t the only convoy, as currently there are convoys traveling from California, Texas, North Dakota and Washington state. Later this week, convoys will depart from Columbus, Ohio, and Cleveland. They will all meet in Washington, D.C. on, March 6.