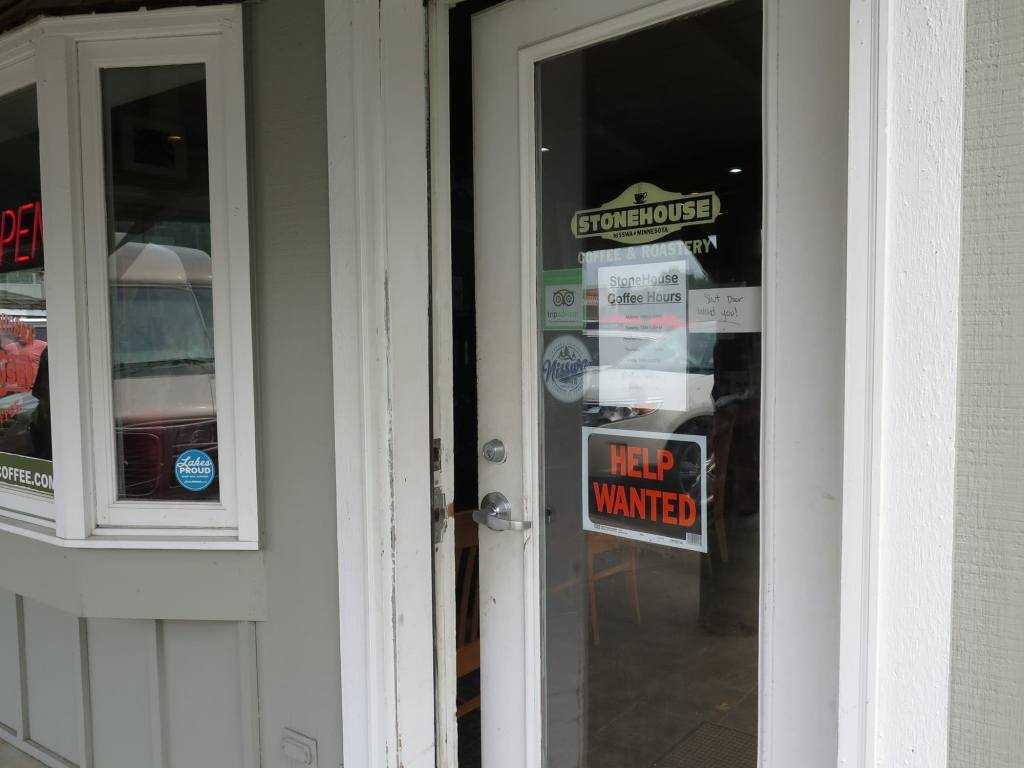 A sign on the door of Stonehouse Coffee and Roastery in Nisswa, advertises job openings. Kirsti Marohn/MPR News

Minnesota’s unemployment rate is the lowest it’s been since early in 1999 as companies confront a tight labor market.

The state’s seasonally adjusted unemployment rate for February was 2.7 percent. That’s down two tenths from the month before. The state agency that tracks the figure says 5,200 jobs were added to payrolls last month – the fifth consecutive month of gains. Another statistic shows a decent-sized uptick in the labor force participation rate.

Minnesota’s Department of Employment and Economic Development reports that about three-fourths of the private sector jobs shed during the early months of the pandemic have been added back.

While the picture is improving, unemployment rates for Black and Hispanic Minnesotans are still notably higher than that of white workers.

“Overall, we’re getting better,” said Angelina Nguyen, DEED’s director of research. “There are still some racial inequities that are very evident.”

But the positive news on Minnesota’s job front is also sparking concerns about the ability of employers to fill open slots.

DEED Commissioner Steve Grove said the pace of continued growth will depend on the ability of businesses to attract workers. He said there are fewer than three job openings for every available worker.

“It is getting to be a tighter labor market,” Grove said. “We continue to be convinced by the data and by anecdote that there are a lot of workers hiding in plain sight that businesses can and should be recruiting.”

There is evidence that companies are going for permanent hires rather than opting for temporary help to meet immediate needs. Temp hiring has flattened, agency officials say.

And the mismatch between available workers and job openings is pushing up pay, especially in the hospitality industry and other sectors where demand is particularly high.

On the whole, DEED says year-over-year average hourly wage increases are up by slightly more than 7 percent. But inflation has risen even faster – at just shy of 8 percent.