A Mason City woman was sentenced to five years of probation Thursday in Freeborn County District Court for firing a gun into a room at an Albert Lea hotel in October. 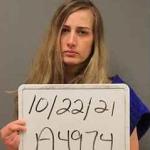 Jessica Ann Hutfles, 22, in January pleaded guilty to one count of felony second-degree assault with a dangerous weapon tied to the incident. One count each of intentional discharge of a firearm that endangers safety and carrying a pistol in a public place without a permit were dismissed.

Law enforcement officers were called to Motel 6 the morning of Oct. 22, 2021, after receiving a call of a woman who had shot a bullet into a hotel room door and fled the scene. Hutfles was ultimately located a short distance away from the crime scene.

Hutfles will receive credit for 154 days spent in the Freeborn County jail and is required to complete chemical dependency treatment. She was slated to be picked up from the jail to go to treatment on March 29.

If Hutfles successfully completes her probation, her conviction will be changed to a misdemeanor.