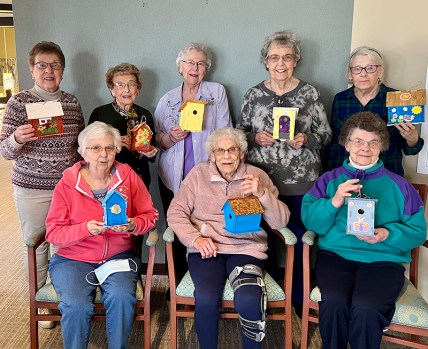 Women participating in the arts and crafts group at St. John's Lutheran Community hold up the birdhouses they recently made. Provided 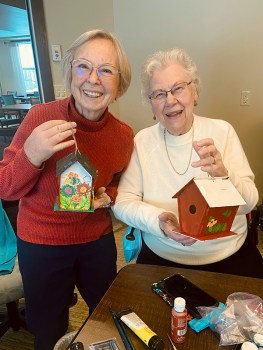 The women in the arts and crafts group recently created bird houses. Provided 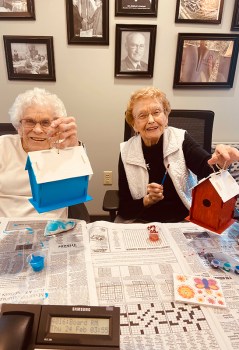 Two of the women in the arts and crafts group pause from painting to take a photo during a recent gathering. Provided 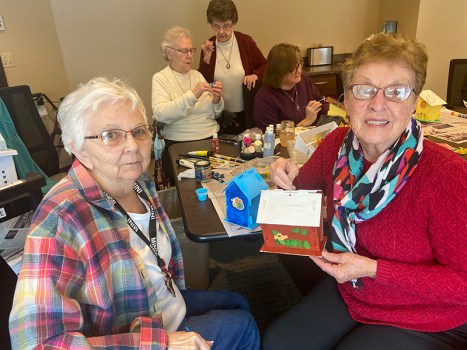 The women at St. John's Lutheran Community are busy decorating their birdhouses. Provided

A new arts and crafts class created by residents at the independent living building at St. John’s Lutheran Community on Fountain Lake is giving residents an opportunity to not only be creative, but to also socialize with each other.

Pembie Erickson, who is trained in arts therapy and as an art teacher, said she and resident Joy Behr started the class in September when the campus was closed again to visitors because of the COVID-19 pandemic.

“Initially the invitation was for anyone to come and bring your own craft project that you’re working on — whether it’s needlepoint, embroidery —but that kind of dwindled away,” Erickson said. “Now the motivation for the ladies is to come together and chat. We encourage each other. We’re stretching our brains to follow the instructions, to be creative and then to finally have a finished product that gives us a sense of accomplishment.”

Erickson said she typically determines the project and orders supplies for it online, and then she and Behr work together to determine the skill level for the other women in the class and how they may need to modify the craft project. Everyone has different limitations, whether that be mobility with their fingers or something else.

Erickson and Behr complete the project ahead of time to have as an example and to figure out how the project will go.

During the class they sit next to people who may need extra help or encouragement and help as needed.

“It’s camaraderie — that’s a big part of it,” Erickson said. “It’s like a support group. We’re all doing the same thing, but everybody is encouraged to add their own personal touch.”

Some of the activities they’ve made so far include birdhouses, watercolor leaves, flowers out of tissue paper, bookmarks, sun catchers and craft puppy dogs.

“Every week it’s pretty much a different project,” she said.

Behr said she has always liked to draw since she was a child and even took some classes in Mankato and also from artist Lloyd Herfindahl.

She said the class is not only a good time to make art, but it’s also a social time.

“It’s fun to see how creative people are,” Behr said. “They called it art therapy, and it really is. It is therapy. It makes us feel good about ourselves.”

Erickson said anyone is welcome — including men — though the group thus far has been all women.

The class meets at 3 p.m. every Thursday for about an hour or an hour and a half.

“It’s just good camaraderie and something to show for the time we’ve spent,” Erickson said.

The group typically meets on the second floor, where there is a library, or in the boardroom.