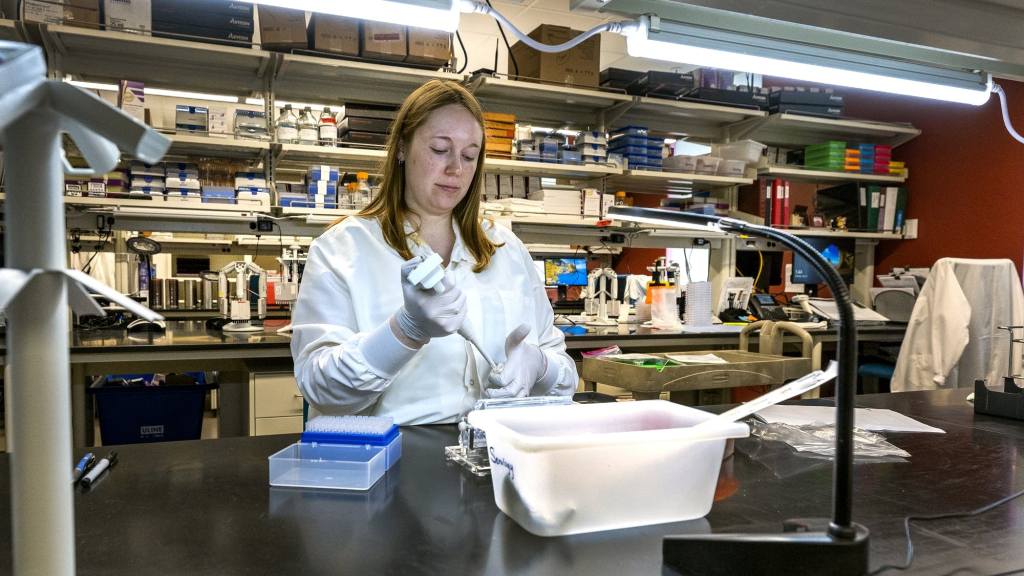 Lab technician Ashley Hurley prepares mycoplasma serum samples Monday. The samples are from local turkeys that will be tested at the Minnesota Poultry Testing Laboratory in Willmar. Paul Middlestaedt

From the outside, the gray building just off Highway 71 in Willmar isn’t very imposing.

But inside, a squad of veterinarians, lab technicians and support staff are waging a quiet battle against the virus that’s threatening Minnesota’s poultry industry.

“We’ve been preparing since 2015 for an event like this,” said Stacy Pollock, manager of the Minnesota Poultry Testing Lab.

With spring on its way, health experts worry that migrating waterfowl will spread the virus to more farms, where it’s deadly for domestic birds. That makes the efforts taking place inside the Willmar lab more important than ever, as staff work to identify new cases of the disease.

The Minnesota Poultry Testing Lab was jointly established by the University of Minnesota’s Veterinary Diagnostic Laboratory and the state Board of Animal Health.

The lab is located in Kandiyohi County for a reason: it’s surrounded by chicken and turkey farms that help make Minnesota one of the top poultry producers in the nation.

It’s more convenient for area farmers to bring samples here than taking them to St. Paul. And Pollock said being local helps the laboratory staff build trust with farmers and the community.

When the lab was started back in the 1960s, it was much smaller, with just one veterinarian and a couple of technicians. Over the years, it changed locations, added staff and became better equipped.

Then, in 2015, came a deadly outbreak of highly pathogenic avian influenza, which resulted in the death of 9 million birds in Minnesota.

After that outbreak, the lab quadrupled in size to allow enough space for PCR testing, in which samples are analyzed for genetic material from viruses and other diseases, including avian influenza.

“Along the way, we get little challenges,” Pollock said. “Maybe it’s not high-path avian influenza. But we get little hiccups along the way, where we have disease events that we’ve been able to test ourselves and to work this lab. And it works really well.”

Every day, the lab receives samples, typically an oral or rectal swab taken from a sick bird, or from poultry in a control zone around an infected flock.

Lead lab technician Dawn Hennen receives the samples, checks the information to make sure it’s accurate and sends them to the appropriate lab.

Hennen has gotten to know many of the poultry farmers who routinely come in. Right now, they’re worried, “understandably,” she said.

“It’s their livelihood,” Hennen said. “A lot of them [come from] many generations of farmers. So it’s a really, really big thing.”

In the serology lab, technicians carefully prepare samples, using digitally calibrated instruments to measure tiny quantities of liquid. The test will show whether the turkey has developed antibodies, either from being vaccinated, or recently infected.

But lately, the most high-profile work has been taking place in the newest section of the lab, where PCR testing is conducted.

Technicians wearing bright blue gloves process samples inside glass biosafety cabinets. Then, the samples go into machines that extract genetic material. The machines can extract the RNA or DNA of about 90 samples at a time, which takes about 20 to 30 minutes, Pollock said.

Then, the samples head to another room for the PCR process, or polymerase chain reaction. A small amount of DNA is copied many times to see if it contains genetic material from a virus or bacteria.

Although avian influenza is on everyone’s mind right now, Pollock said they look for a host of diseases that can befall poultry, including virulent Newcastle disease and bacterial infections.

The lab staff know that containing the latest avian influenza outbreak is an uphill battle. This week, they confirmed several new cases, and they know more are likely coming.

“There’s so many waterfowl that are tracking it around all over the country and all over the Midwest,” said Jerry Torrison, director of the university’s Veterinary Diagnostic Lab. “And so we’re monitoring it very carefully, and are very concerned that it could become a large outbreak.”

But staff also know that the work they’re doing here to quickly identify new cases is critical to slowing the disease’s spread.

The next few weeks will be critical to determining how widespread the outbreak is, Pollock said.

“People are going to keep testing,” she said. “They have a lot at risk.”