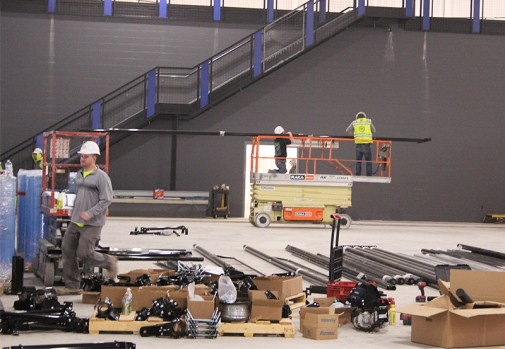 Construction workers are hard at work in the Viking Athletic Center on Monday in Northwood, whether that's installation or painting. Alex Guerrero/Albert Lea Tribune 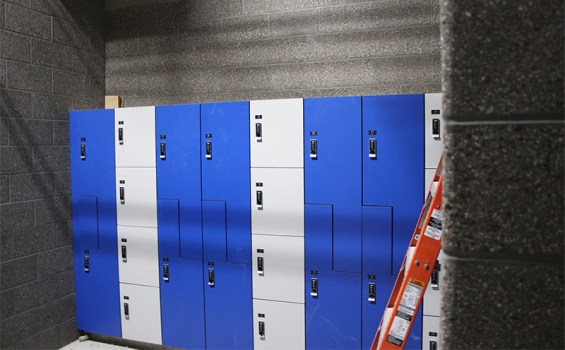 After some delays, the new Viking Activity Center at the high school at the Northwood-Kensett Community School is getting ready to open.

Michael Crozier, superintendent of Northwood-Kensett Community School District said the center — 38,554 square feet and two levels — will be used for teams to practice and condition. The center will also be open to the community via memberships.

Crozier described the project, $5.3 million, as a combined effort between the community and school, and this will be the first of its kind in the area.

“It was one of the things that the community brought to me,” he said. “That we needed more practice space for our students, for our elementary kids all-around. “So this is one of the ways to solve that issue.”

The school district had two gyms, which also had to include elementary sports.

“Everybody wanted and needed gym space,” he said.

The new space will include two courts, a wrestling room, locker rooms, a community room, men’s and women’s locker rooms, a physical therapy office and offices on the bottom floor. The upper floor will have a track and weights. There will also be a cardio area with treadmills, stationary bikes and elliptical machines. None of the equipment has been shipped yet, but Crozier said it was ready to be delivered.

Previously, students in sports used the gyms at either the elementary or junior/high school and resulted in them consistently being full.

Construction started last April and was originally scheduled for completion in February, but is now projected to open June 1. Only members can use the activity center. Memberships range in cost from $400 annually (for a family) to $80 (students in grades nine to 12).

“[I want this to be] a place where all of our students have the opportunity to practice all of their sports they want, elementary through high school, and a place where the community can come and work out, have a gathering place. It’s both not only for the school but a community place also.”

To pay for it, Crozier said he borrowed against the one-cent sales tax the district receives annually, and the community chipped in about $1 million.

“We borrowed $3.2 million, I think, against that,” Crozier said. “So we’ll pay it off over the next eight years.”

The center is attached to the high school building at 701 Seventh St. N.