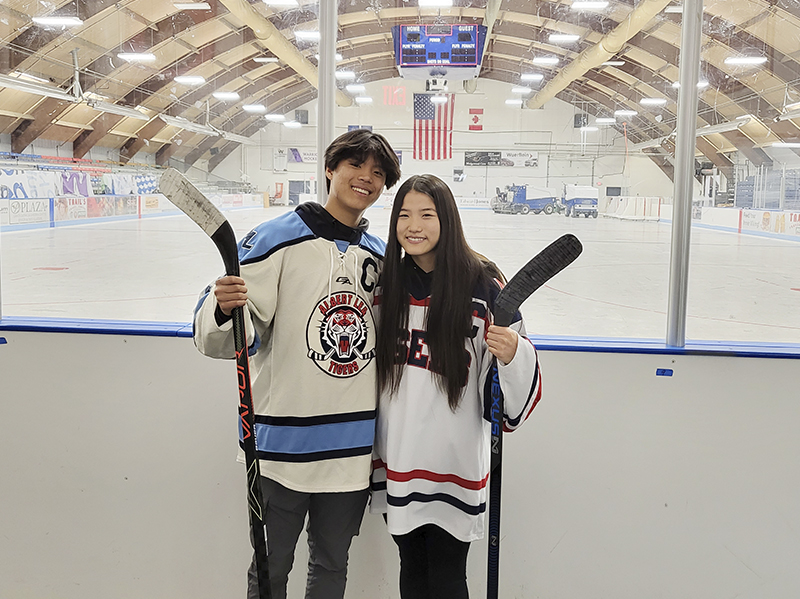 Joseph and Esther Yoon, who both learned hockey at a young age, have been important parts of the boys' and girls' hockey teams. James Sanchez/for the Tribune

By James Sanchez, for the Tribune

Joseph Yoon and Esther Yoon are a pair of Korean siblings that began hockey at an early age. Joseph, who started in the second grade and Esther, who began in the first grade, stated that hockey almost runs in their blood, as they also have an older brother who was heavily involved as a hockey player and has since found his passion for music.

Joseph said his journey into the arena started when his father brought him to Lakeview Park’s outdoor rink.

He stated ever since that day, he only wanted to get better and fully immersed himself into the game. He immediately began to try out for higher level teams such as the squirt team, and despite not making it on the team the first time, he decided not to quit.

After two years of dedicating himself to this sport, he began to persevere, which has translated into him being a key part of the Albert Lea High School boys hockey team.

Joseph will be entering his senior year knowing that he will continue to get better and give all his effort, as he has state on his mind.

Joseph also states that his journey in the arena will not stop there, as he looks to continue playing into his collegiate years and see what opportunities come his way, all the while thinking about a degree in sport medicine.

Esther’s journey, on the other hand, started in a different fashion. Esther began playing hockey in the first grade while also being involved with figure skating. After the first year, she was given a choice by her parents to commit to one sport, as they understood the intensity required with such dedication. Esther, of course, chose hockey and Albert Lea has definitely benefited from that decision as she was a key cog to the Albert Lea Tigers making it to state for the first time this year. Esther, however, has decided that her journey in this arena has ended as she will not be pursuing hockey into her collegiate life next year, as she has dedicated herself to her studies and is pondering about being a physician.

All of the success that these siblings have already had doesn’t just come from hard work, dedication and the commitment to hockey, although that is certainly a large part of it. The Yoon siblings also made sure to speak about the commitment their parents made in them, as well.

Whether it was buying DVDs so that they could learn the game themselves or having synthetic ice in their basement for them to practice on, they certainly appreciate how much support they have had from their parents. The investment the parents have made in their children has already shown to be fruitful.

When the Yoon siblings are not crushing it on the ice, they take the opportunity to pursue other interests. Joseph is into playing his guitar and making worship songs while Esther has taken a large interest in different languages. They also like to simply relax and just unwind with friends.