ALPD’s newest officer has prior experience in the area 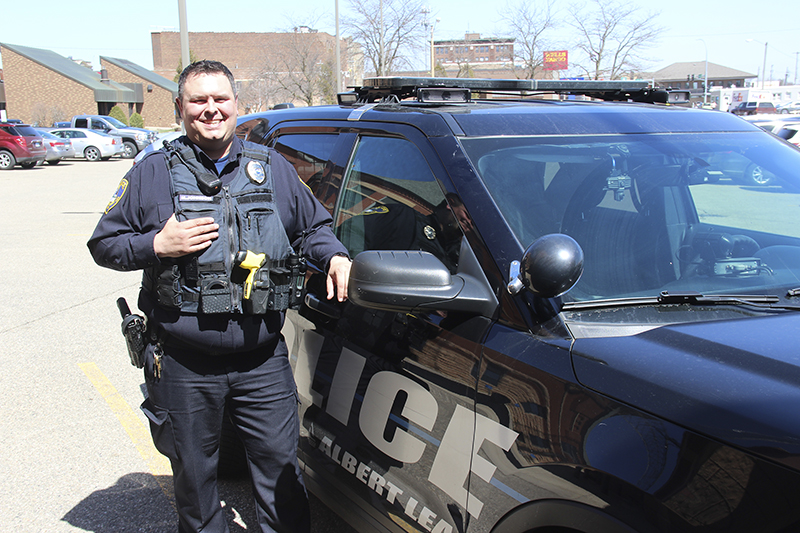 The Albert Lea Police Department’s newest officer is no stranger to the area.

Michael Johnson moved to Albert Lea 14 years ago and started in the Freeborn County jail in 2011 as a correctional officer. He served two years there before starting at the Wells Police Department in 2015, where he worked until recently when he got the job in Albert Lea.

Johnson said originally he wanted to get into law enforcement as a Department of Natural Resources officer, but there was a freeze in the hiring at the time, so he switched gears and started getting involved with the Albert Lea Police Department doing ride-alongs.

“I kind of found my passion for it through that,” he said.

When the chance came up for him to serve his own community, he said he was excited at the opportunity.

“I take great pride in that,” he said. “We have family here, so it’s always nice to be closer to home. And this department just has exceptional training and officers, and you don’t hear anything bad about them — it’s all good, positive.”

Johnson started March 21 in Albert Lea and for somewhere between eight and 16 weeks will be in field training.

He said so far his training has included use of force training and firearm qualifications, as well as focusing on the city’s geography and trying to familiarize himself with more street names in the community. He has also gotten orientations and been set up on the computers.

“It’s trying to get as much experience in the calls that are happening, and working through the process of where reports need to go and proper evidence,” he said.

He said his time thus far “has been amazing,” and said he enjoys the pace of calls in Albert Lea compared to Wells. He said his field training officers have been knowledgeable in answering all of his questions.

“We’re excited to be full strength again,” Hanson said. “It’s been several years since we’ve been full strength. This will give us more flexibility on staffing, and will allow us to increase our coverage.”

He said Johnson has been a good addition to the department and fits in well with the staff.

Johnson, and his wife, Stacy have two boys ages 6 and 10.

He said they enjoy camping in Iowa and he enjoys hunting and fishing. His wife works at Good Samaritan Society of Albert Lea.