Loving wife, mother, grandmother, great-grandmother and friend passed away peacefully on April 21, 2022 at Harmony River Living Center in Hutchinson, MN surrounded by loving family and caregivers. She was 90 years old. 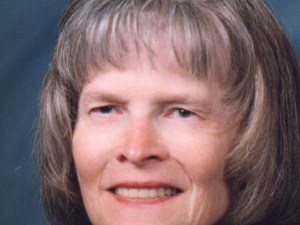 Bev was born on May 13, 1931 in Albert Lea, MN to Elmer and Mabel (Runden) Nelson. She attended school at the Faribault School for the Blind, graduating there in 1949. After graduation, Bev moved back to Albert Lea where she met and married Jack Sainsbury on September 2, 1950. They shared nearly 65 years together until his death in 2015. Jack and Bev had three children, Gregg, Gwenn and Ganalee.

With three small children at home, Bev relished her role as a stay-at-home mother and homemaker. She was also a surrogate “mother” for other working Moms in the neighborhood and provided day care for several children, including one with special needs.

Bev was small in stature which contrasted with her huge heart and unfailing love and commitment to her family. She was a fierce defender and advocate for her family, which always came first. She was an excellent baker and was renowned for her amazing ability to devour an extraordinary amount of cookies at Christmas! She loved nothing more than hosting holidays and attending birthday and life event celebrations. She and Jack always made attending kids’, grandkids’ and great grandkids’ special events a priority and often travelled some distance to do so.

After Jack’s death in 2015, she bravely moved to Ecumen Pines in Hutchinson to be near family. She made many new friends and admirers at the Pines over the 6+ years she resided there. When she was no longer able to care for herself, she moved to Harmony River Living Center in February 2022.

She was preceded in death by her parents Elmer and Mabel Nelson; husband Jack Sainsbury; daughter Ganalee Esser and son-in-law Pete Esser; brother Clare Nelson and sister-in-law Lenore Nelson and other aunts, uncles and cousins.

A private family service will be held later this Spring at Hillcrest Cemetery in Albert Lea.