Dale Golbuff, 90, passed away with family by his side on Wednesday, April 6, 2022, at St. John’s Lutheran Community in Albert Lea. 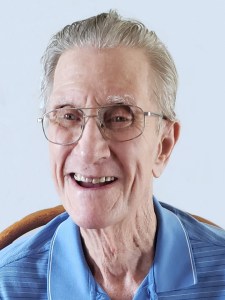 The funeral service for Dale will be held at 11:00 a.m. on Friday, April 15, 2022, at Trinity Lutheran Church in Albert Lea with Pastor Eileen Woyen presiding.

The visitation will be held on Thursday, April 14, at Bonnerup Funeral & Cremation Services from 5:00 p.m. until 7:00 p.m. The visitation will continue at the church on Friday from 10:00 a.m. until the time of service, with burial at the Graceland Cemetery.

To leave condolences for the family, visit his obituary at www. bonnerupfuneralservice.com.

Dale Golbuff was born on Thursday, December 10, 1931 in Hayfield, IA to Oscar and Bessie Golbuff. He was baptized on Sunday May 1, 1932 at the Hayfield Methodist Church in Hayfield, IA. Dale graduated from Hayfield, IA High School in May, 1949. Graduating class size of 19.

Dale enlisted into the U.S. Air Force in December 12, 1952 during the Korean War and was stationed at Parks Air Force Base, California. After his military service, he returned home and went to work for his father-in-law, John T. Johnson at Johnson’s Feed Store in Northwood, IA. Dale was hired as a deputy for the Worth County Sheriff’s Office, Northwood, Iowa where he served from 1960 to 1965. In 1965, Dale was hired as a patrol officer with the Albert Lea Police Dept. where he served the community until his retirement in 1992. Dale was community minded and worked hard to serve the citizens of the Albert Lea. Dale loved his work, had a big heart and loved serving his community. He was especially proud to have 3 generations of his family in law enforcement. He has been described as a kind, caring, compassionate, generous man who always had a smile for everyone. Someone who looked out for the whole neighborhood and always is willing to lend a helping hand.

Dale was very civic minded thru his career with the Albert Lea Police Dept., his involvement with the Boy Scouts of America, Salem Lutheran Church, assisting in teaching Snowmobile Riding Certification. Besides civic involvement he and his wife, JoAnn, enjoyed riding motorcycle with the Christian Motorcycle Association. Dale and JoAnn delighted in hosting numerous kids and families alike at their dock, the Golbuff Ghetto, on Fountain Lake. They enjoyed the lake, giving rides on their boat and pulling kids on a surfboard behind their boat.

Also lovingly survived by special friends Jim and Jody Gatschet of Pleasant Hill, MO and Jon and Cindy Rose of Lemoore, CA. Dale was preceded in death by his wife, JoAnn in 2014; his parents, Oscar and Bessie and his younger brother, Gary.

A special thank you to the staff at St. John’s Knutson Place, The Meadows and Sheltering Arms for the loving care they have all given our dad over the years.