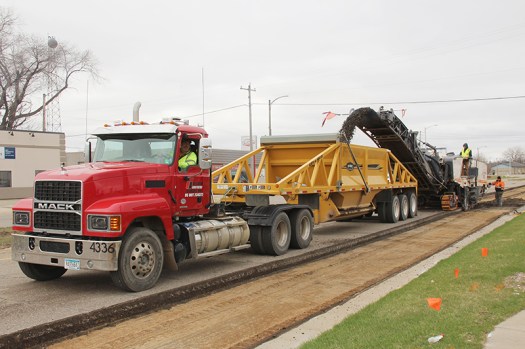 Crews with Ulland Brothers begin roadwork Monday on East Main Street near Walgreens. The stretch from Newton Avenue to the Shell Rock River bridge is expected to be closed through early August. Sarah Stultz/Albert Lea Tribune 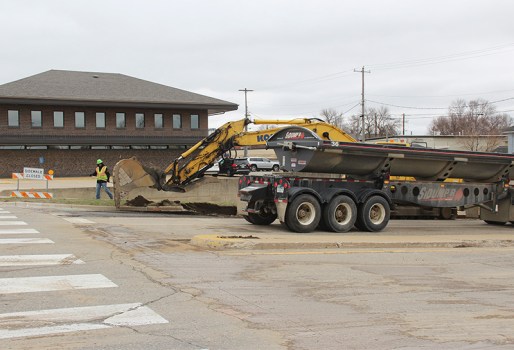 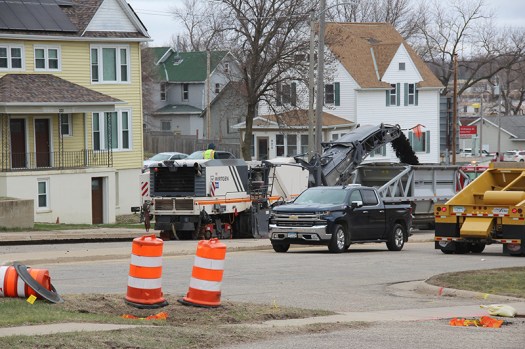 Crews work up and down along East Main Street between Newton Avenue and the Shell Rock River bridge Monday on the first day of the construction for the summer project. That stretch of the project will see a complete reconstruction. Sarah Stultz/Albert Lea Tribune

The stretch is expected to be closed through early August, and traffic is detoured to West Front Street. People seeking to get to the homes or businesses nearby should do so through alternative entrances.

Crews will work to reconstruct and raise the roadway two feet in the lowest lying areas to counter flooding, along with increasing storm sewer intake capacity to better drain the roadway. Backflow prevention will also be installed to limit adjacent flooding areas from adversely impacting the roadway, and sediment ponds will be installed to take some of the extra water during rain events, including one on the former Godfather’s Pizza site.

Work is also expected to begin Thursday with a culvert replacement between Sorenson Avenue and East Main Street, which will take about two weeks to complete. During that period, traffic will be detoured from Main Street to Blake Avenue and then back to Main Street.

Construction on the third and fourth phases on East Main Street, from the Shell Rock River bridge to Sorenson Road, is expected to run from early August through October. That work includes resurfacing of the road, construction of new medians, turn lanes and travel lanes.

Stage three will start on the inside lanes and medians, followed by stage four with the outside lanes. During those two phases traffic will be reduced to one lane in each direction.