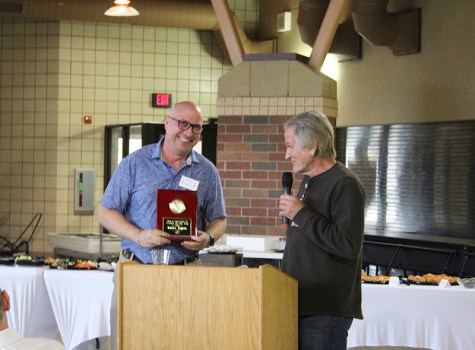 Burke Egner accepts the 2022 Albert Lea Teacher of the Year award from Neal Skaar, the chairman of the Albert Lea school board, at an event Wednesday afternoon at the high school. Alex Guerrero/Albert Lea Tribune 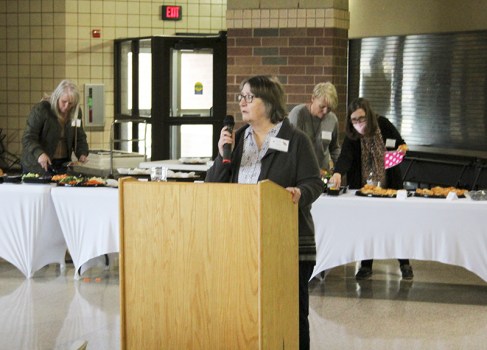 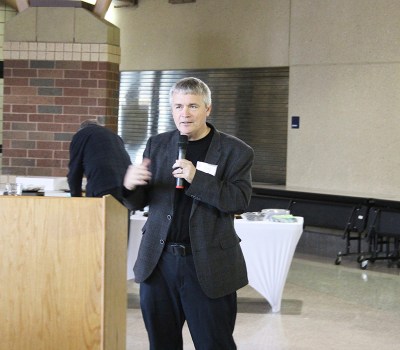 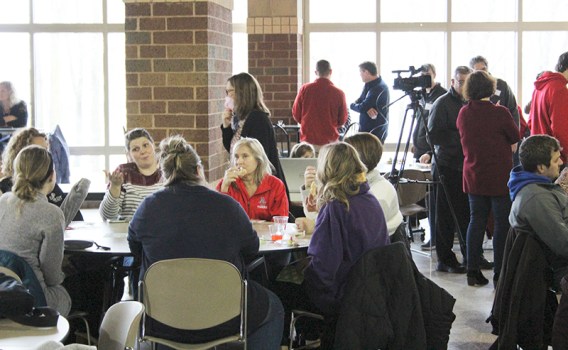 Teachers and families were on hand Wednesday for the Teacher of the Year presentation at the high school. Alex Guerrero/Albert Lea Tribune 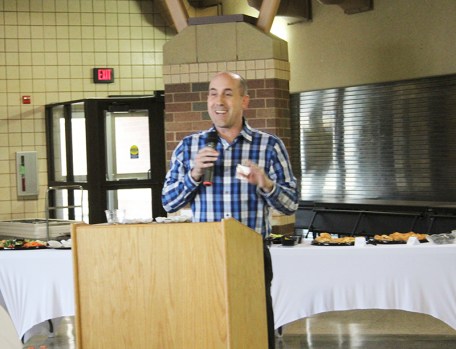 Last year's Teacher of the Year, Kevin Gentz, talks about what teachers can learn from students. Alex Guerrero/Albert Lea Tribune

What do Kevin Gentz, Paula Olson and Burke Egner all have in common, besides teaching?

They are all recent recipients of the Albert Lea Teacher of the Year award, which was presented to Egner Wednesday afternoon during a reception at the high school.

“I’m beyond grateful and humbled,” he said. “I can’t believe that I’m actually being a part of this experience. There’s so many amazing teachers within our district.

“To be picked from that, the cream of the crop, it’s really an amazing experience.”

Egner, who is a STEM teacher and the technology integration coach for the district, said he was surprised at the selection, saying there were many amazing teachers within the district. He also hopes his selection can inspire other teachers within Albert Lea Area Schools.

Neal Skaar, chairman for the school board, presented the award.

“I was just blown away,” he said, referring to finalists Egner, Audra Beussman, Mary Bissen, Jacqui Richter and LaChelle Sandon. “These people are outstanding, amazing.”

He also referred to them as having the habit of excellence.

Skaar also joked that he was worried the candidates would move on to something else.

Superintendent Mike Funk opened the ceremony by congratulating the finalists.

“One of the slogans I have here in Albert Lea is ‘always expect the best,’” he said. “Today is a great day to celebrate the best — we celebrate our teachers.”

Funk, who has been with the district for 13 years, said one of the most important parts of being in education was making connections with students and thanked everyone who made those relationships.

Laura Wangen, the secretary for the Albert Lea Education Association, noted that in today’s world successful teachers had to be collaborative, flexible and needed to find balance.

“It’s important that we keep calm,” she said. “Because as educators we are responsible for the welfare of others.”

Kevin Gentz, last year’s award recipient, stressed an importance that teachers surround themselves with caring people to go to without fear of judgment.

He also stressed the importance of how people teach as being as important as the content.

Egner has been with the district for five years.

He serves as the coach for both the middle and high school robotics teams, is head coach for the middle school’s video game club and is the lead sponsor for Southwest Active Youth.

During Skaar’s introduction to the finalists, he shared the story of when Egner, who was having a Civil War reenactment (complete with a cannon that fired blanks), forgot to notify law enforcement agencies about it.

“My world was turned upside down when news helicopters, SWAT team and three law enforcement agencies showed up at our school football field for what was reported as “bombs going off.”