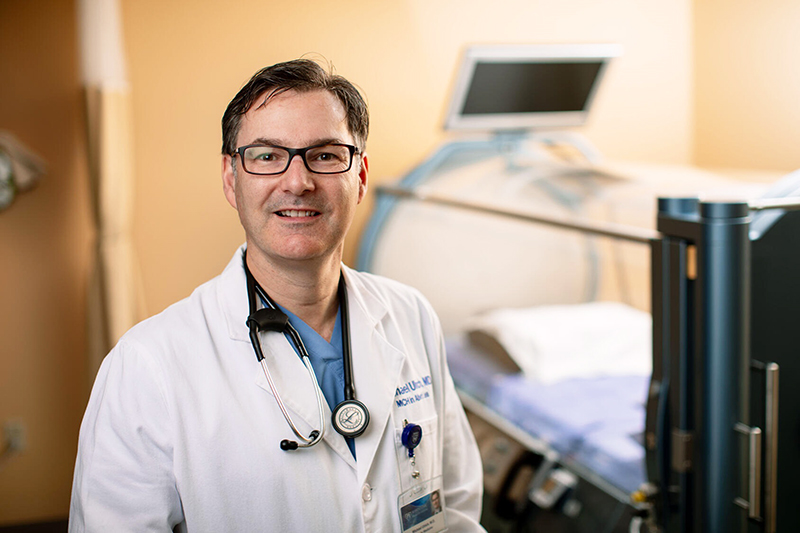 Michael Ulrich, a family medicine physician at Mayo Clinic Health System in Albert Lea, used one of the hospital's hyperbaric chambers to help treat his own hearing loss. Provided

Michael Ulrich is a family medicine physician at Mayo Clinic Health System in Albert Lea, and it’s his job to help people. But he was the one who needed help after he started losing his hearing last year.

Ulrich caught it before there was a vaccine and became really sick, sicker than he thought.

“With that, I lost my sense of smell completely, I had zero smell,” he said. “In fact, to this day (1.5 years later) I cannot smell anything at all.”

Along with his loss of smell, a few months after he recovered he started to lose his sense of hearing.

According to Ulrich, the loss of hearing typically is gradual. But for him, it was abrupt.

“Literally, I could almost feel it happen,” he said. “I felt like a pop in my ear, like a sudden thing, and I noticed that I can’t hear that well.”

Ulrich said this type of hearing loss occurs when patients suddenly lose the ability to hear out of one or both ears.

“This is kind of a medical emergency when it’s a rapid thing,” he said. “It’s almost like a stroke in a sense.”

After seeing an ear, nose and throat specialist, he underwent an audiogram that showed he experienced significant hearing loss in his right ear. He also had a loss in speech recognition and tinnitus, a ringing in the ear.

At that point, it was clear this was acute sensorineural hearing loss, and he immediately thought of using the hospital’s hyperbaric chamber for treatment. It was a treatment he had used to help other patients with.

“Within hyperbaric medicine we have a bunch of different things that we treat,” he said. “And one of them is this phenomena that is called acute sensorineural hearing loss.”

Ulrich said the best treatment was injecting a steroid into the ear roughly once per week with a high-dose oral steroid and doing a hyperbaric treatment, something Ulrich said was in adjunct to the injection.

Because he specializes in hyperbaric medicine and had already treated people, Ulrich said he considered the treatment immediately.

The hyperbaric treatments were five days a week for 20 treatments, with each treatment lasting 90 minutes. Ulrich started his treatments March 22, 2021, and finished April 16, 2021.

“You’re in a chamber that you’re sealed in, and instead of air — which is real air that we breathe, which is 20% oxygen or whatever — pure oxygen is put in the chamber,” he said. “So it’s now 100% oxygen, and the pressure is increased usually at least twice the atmospheric pressure. So basically you’re in a bomb.”

He explained in the bloodstream the oxygen people take in from breathing is carried in blood cells and that there was a limit to where blood vessels could go. But with high pressure and high oxygen, that oxygen diffuses out of vessels and goes into a lot of body fluids, reaching areas that wouldn’t normally receive oxygen.

“The nerves in the ear that process the hearing and translate it to nerve impulses, the thought is that they may become ischemic or injured,” he said. “The whole goal is to help them heal, and so in this environment of the high pressure, the high oxygen, there are a lot of molecular changes, things like stem cells get activated that can help rebuild neurons.”

He said the hearing loss was something he wanted to act on immediately.

“When we treat somebody, you want to do it as soon as possible, you want to get them going within a couple of weeks at the latest,” he said.

Ulrich said the treatment helped to a degree and he experienced a 10 to 20% hearing improvement.

“It wasn’t huge, but I was able to understand speech and words,” he said. “That came back, and I had slight improvement. So I didn’t get my hearing back completely, but I think it was worth it compared to not having it.”

He also admitted getting the shots weren’t his favorite experiences.

“I’ve had a lot of painful things,” he said. “In fact, I broke my neck in a bicycle accident in 2016, and I ended up having a two-level fusion in my neck, and that was kind of painful.

“… having that injection in my ear was one of the most painful things I’ve ever had, but I knew it was helpful to do.”

If you suspect you or someone you know may have acute sensorineural hearing loss, Ulrich recommends visiting a doctor to confirm it. Using hyperbaric treatment for a COVID-related hearing loss is a one-time treatment, but said if he lost hearing again or if it happened in his left ear, he could do it again.

“We have this incredible resource here in Albert Lea,” Ulrich said.