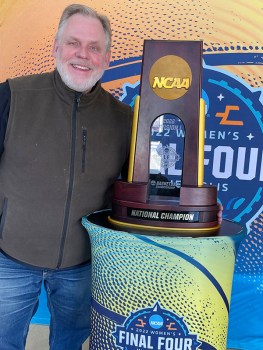 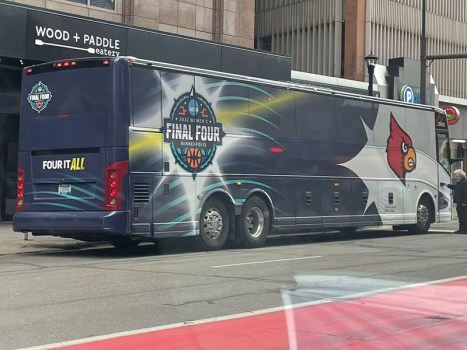 By James Sanchez, for the Tribune

A transplant from Eagan and now employed in Albert Lea, Randy Cirksena Jr. has had several special moments in his lifetime.

With a master’s degree of theology in Christianity Church History in America and a master’s degree in divinity, both from Duke University, Cirksena looks to continue his path of enlightenment further. But when he isn’t obtaining advanced degrees, such as his doctorate, he enjoys spending his time indulging in sports.

Cirksena has been well connected and able to participate in a litany of events. Whether it is The Clash, which brings in 32 wrestling teams from the Upper Midwest to compete in a tournament or connecting with Crew 52, which helped put together a lot of effort towards the Superbowl when it came to Minneapolis, Cirksena knew that the Women’s NCAA Final Four was something he simply could not miss out on.

After reaching out to Crew 52 and not being able to find an avenue to the Final Four, he recognized that he had to continue searching. Cirksena then went to an avenue everyone has gone to: Google. After following up with a few phone calls and diligence, he was accepted into the “Final Four Experience at the Convention.”

Upon being accepted, Cirksena was entrusted to handle the courtesy car driving, which needed a clean driving record and a quick mind for navigation. Cirksena completed those duties with pride, as he was able to escort individuals going to and from the event.

He completed it with great pride as he recognized that this is a moment to represent Minnesota, which will lure future large events here. He enjoyed volunteering so much that he was able to assist in welcoming attendees to the WBCA Convention and welcoming attendees to the Tourney Town, which were to further introduce young people to the sport of basketball. He experienced how the buses were escorted by state troopers and saw the fans’ reactions as they came and went. He was able to have conversations with people from around the world and find commonalities and make japes along the way. And after it was all said and done, with a full day of volunteering, Cirksena found joy in simply returning home after the volunteering was done.

He was more than delighted to have been a part of this process and he answered the question that most of us probably would have asked, “Were you able to get in to watch a game?” He answered: “No.”

Cirksena said he wanted his experience to be about volunteering and representing Minnesota and Minnesotans as “genuine,” so that they can continue to have future sporting events like this come here. He said he wants Minnesota to be built as a sports hub for future events and believes it has plenty of room to grow, yet.