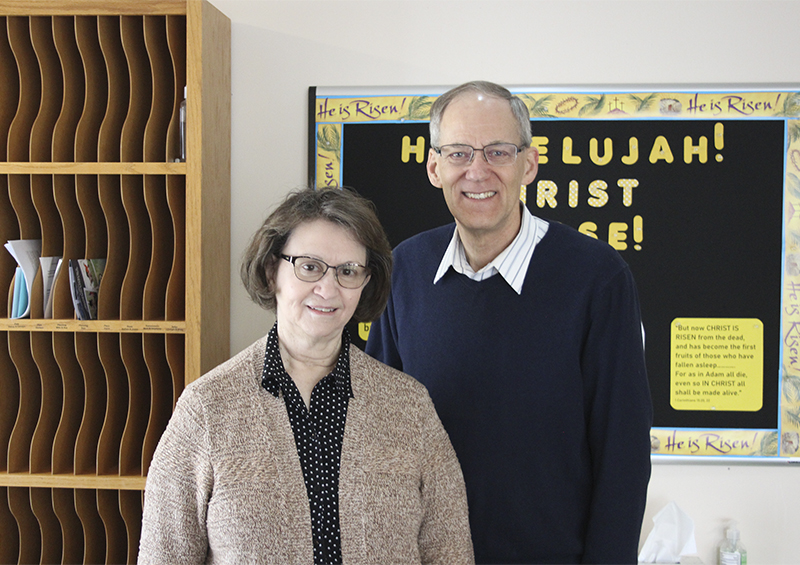 After serving as an interim pastor at Faith Baptist since September, the Rev. Dwight DePenning officially took over April 1. Here he is with his wife, Sheila. Alex Guerrero/Albert Lea Tribune

There’s a familiar face taking over at Faith Baptist Church — Dwight DePenning — who officially received the call in March to be pastor.

His first day was April 1, but he has been the interim pastor since September, and served as an interim pastor in an earlier stint at Faith Baptist in 2018.

“[We] really enjoyed our time with the people here and really felt a real connection with them at that point,” he said. “So then when their last pastor left, they called me up and said, ‘Would you come back again and help us during an interim time while we look for another pastor?”

Eventually, the church asked if he would take over full time, and after praying on it, DePenning and his wife, Sheila, agreed to come.

“I am somewhat towards the end of …  where most people would be retired already,” he said. “But the Lord still, I think, just kind of put our hearts together I guess on that. And since I want to continue to serve God as long as he gives me energy and strength and ability to do so [and] they’re willing to put up with an old geezer, we’ll do that.”

He said so far the new role has kept him busy, and he has used that time to familiarize himself with the people of the church.

“Most Sundays we take somebody out to eat, get acquainted with them and enjoy getting to know the people,” he said.

He is also familiarizing himself with the church and appreciates the work of the church’s deacons.

“I think we’re on the same wavelength in what our goals are and purposes are here,” he said. “… We’ve just had an enjoyable time really getting to know the people.”

During May, First Baptist will conduct a survey to collect ideas and goals the church could implement in the future.

“At the same time I’m very much a group decision-maker,” he said. “I’m not so much ‘I set the program [and] get everybody to follow me.’ I’m basically more of a consensus-builder.”

DePenning grew up in a pastor’s house and got to see life as a pastor firsthand, an experience he admitted influenced him.

“For me, it’s just a burden that the Lord put in my heart to minister the word of God to people,” he said.

Being raised in such an environment made it easier for him to choose a career as a minister.

“The Lord gave me a number of opportunities to have a number of experiences, even as a high school kid,” he said. “I taught Sunday school class and vacation Bible schools and those sorts of things.”

DePenning is originally from Iowa, having been born and raised in the area. He attended Faith Baptist Bible College to prepare for Christian service, and he stayed on as an assistant pastor in Carlisle, Iowa. He then went to Grace Theological Seminary.

DePenning and his wife have worked in west Africa, serving as dorm parents for high school boys in the Ivory Coast. They’ve also done missionary service in the city of Cotonou in the Republic of Benin, helping train pastors and establishing youth programs. Upon returning to the United States, he pastored in northern Indiana and taught at Maranatha Baptist Bible College in Wisconsin. He also taught at Pillsbury Baptist College in Owatonna. Before coming to Faith Baptist, he pastored in Redwood Falls before moving back to Owatonna.

The couple lives in Owatonna and has two adult children. The two enjoy spending time with them, and DePenning likes home improvement projects.

“I enjoy working with my hands and carpentry and … painting,” he said.

Across the Pastor’s Desk: The proof of new life from God

Across the Pastor’s Desk: Christ can bring us to new life