Funeral services for James Leonard “Pat” Lair, age 100, of Albert Lea, will be held on Saturday, April 9, 2022, at 10:00 a.m., St. Theodore Catholic Church in Albert Lea. Father Kurt Farrell will officiate. Interment will be in St. Theodore Cemetery. Visitation will be from 4:00 to 7:00 p.m. on Friday, April 8 at Bayview/Freeborn Funeral Home; and also one hour prior to the time of the service at the church. Service will be livestreamed from the Bayview Funeral Home Facebook page at https://fb.me/e/4Nm34B3FJ. Sign the guest book at www.bayviewfuneral.com. 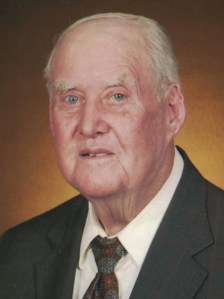 Pat married Verliss Delphine Lofthus on July 22, 1943, at St. Theodore Catholic Church, celebrating their wedding dinner at the A & W Root Beer Stand. They made their home in rural Emmons from 1943–1949 and moved to their farm in Hayward. Pat retired in 1990 and they moved to Albert Lea.

Pat was well known for his gentle nature, kindness, had a big heart, and loving everyone. He never had a cross word about anyone, he says, “If you can’t say something nice about someone, keep your mouth shut.” Pat enjoyed going up north fishing, play cards, dancing, Jake’s pizza and diet Coke, woodworking, making rosettes and cracker jacks. He served on the boards of Hayward Co-op, Hayward Township, and 27 years for Bayview/Freeborn Funeral Home.

The family extends their gratitude to the staff of St. John’s and St. Croix Hospice for taking such good care of Pat.