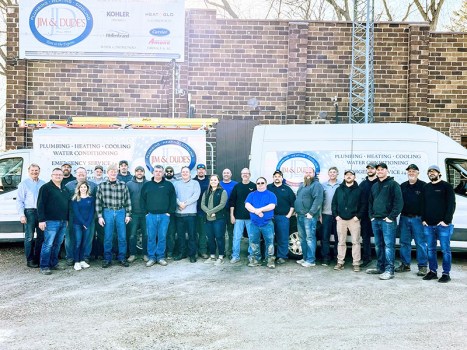 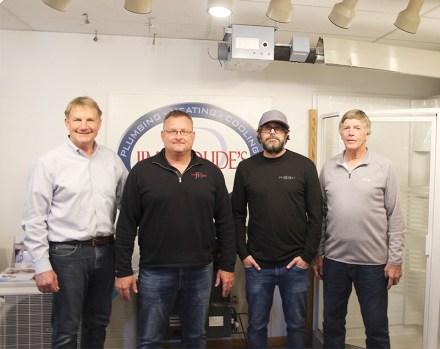 Dennis Bergstrom and Rick Hanson were with Jim & Dude’s Plumbing, Heating & Air Conditioning for a long time. So it made sense that Thursday, Bergstrom’s last day, the company would have a party to celebrate the two.

Until recently Bergstrom was president of the company until he was bought out in January. Following the acquisition, he stepped down to the role of vice president. Thursday was his last day at the company before retiring.

The plumbing, heating and air conditioning service started when Bergstrom’s father, Jim, and Duane Van Ryswyk — aka “dude” —  started the company after working at a previous plumbing company for over 20 years.

But in 1970 the owner of that company closed shop, where the two worked for another plumbing company out of Alden. In November 1972 , already known in the area, the two decided to open their own business.

He himself started when the company did, and worked in the shop and, with the exception of school and another year in Florida, has been with the company every step of the way.

Throughout his time at the company he’s learned to appreciate the customers and called them “great.”

“It’s pretty interesting, gratifying, to hear so much of the feedback from a lot of our customers,” he said.

Hanson, the other owner, had worked for the company before it became Jim & Dude’s, and both Jim Bergstrom and Van Ryswyk worked for a different company.

Hanson actually started in Alden and Austin doing plumbing, hot water heating and “anything to do with piping.”

Hanson, who officially retired four years ago but comes in to help, admitted his time there went by fast and called the company a good place to work.

Looking back over the years, he remembered the time he was called to a rural house whose residents were gone for the winter.

“Called in by a Realtor cause when we got out there and there was water up to the door,” he said. “… I pretty much explained to the Realtors, I said ‘I don’t think we’re going to be going in the front door.’”

That’s because he was standing outside of a glass door, and water had flooded the basement and reached the next floor.

“It was in the middle of the winter, so I think what water did leak through the cracks, I think it maybe froze,” he said. “… We’re talking about nine feet of water in a house.”

His favorite part of working there was the shared camaraderie.

“Everybody got along real well, and I think that’s a big part of it,” he said. “If everybody gets along and you work well together, I think that’s the key to everybody’s happiness with this thing.”

Bergstrom credited the exceptional employees he has had as the reason the company has lasted so long.

Brett, whose responsibilities are mostly plumbing-related, had been employed on and off with the company since 1999 and became a full-time worker in 2003.

“It’s a fun place to work,” Brett said. “We’ve got a great team here doing a valued business for the whole community.”

Linn, who started part time as a high school student, is a project manager and estimator for the company. After graduating with a degree in business management, he started full-time in 1999.

“[I’ve] kind of done a little bit of everything here,” he said. “… But the last 20 years has been basically just bidding plumbing and HVAC.”

Both Brett and Linn want to keep the company as similar to its current model as possible.

“We just want to keep our clientele like we have it,” Linn said. “We’re not trying to make any major changes to the company. We just kind of want to keep it going as it is. It’s been a very successful business over the years.”

Bergstrom’s future plans include spending time at his cabin and seeing his grandsons. He also has a daughter in Montana, along with his sister-in-law, and wants to get out there. And golf more.

Rick Hanson plans to continue his quasi-retirement and continue to do bits and pieces.

“I do have grandkids in town playing hockey, so I need to be here for hockey games,” Hanson said.

“I’ve got a grandson in Florida and I do need to see him,” he said.

By Bergstrom’s estimation, about a third of the company’s clientele is residential, while the other two-thirds is commercial. There are 30 employees.

Jim & Dude’s Plumbing, Heating & Air Conditioning is open from 7:30 a.m. to 4:30 p.m. Monday to Friday, and is available for emergencies after hours.