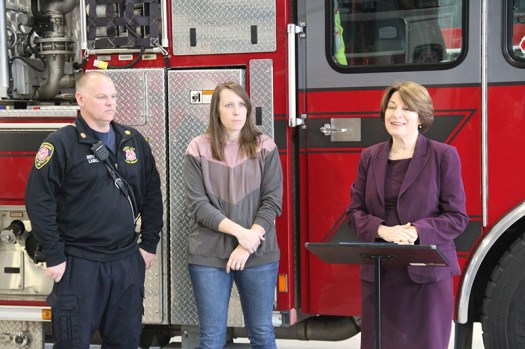 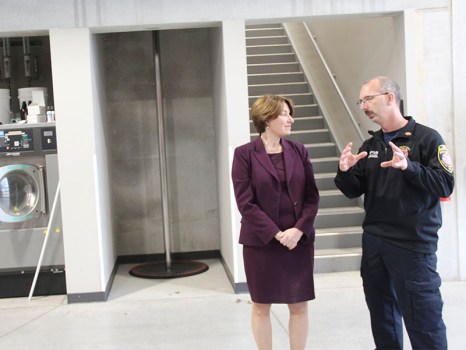 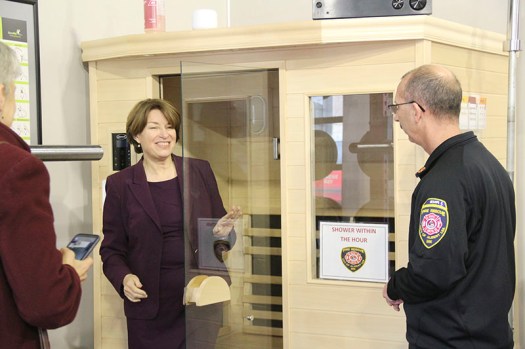 U.S. Sen. Amy Klobuchar steps in and out of the dry sauna in the Albert Lea fire station that was championed by the late Albert Lea Fire Lt. Brett Boss. Firefighters go into the sauna after fighting fires to bring the toxins from the air to the surface of their pores, after which they can wash them away in the shower. Sarah Stultz/Albert Lea Tribune

Klobuchar, who had worked with Boss in his efforts to obtain safety measures for firefighters on both the state and national levels, said she was impressed with Boss’s spirit and that he didn’t wallow in his cancer diagnosis but instead tried to make things better for other firefighters.

“Brett was a hero to many,” she said. “He had years of experience. … He had 18 years as a firefighter, EMT, hazmat technician, fire investigator, firefighter instructor, and after his cancer diagnosis he kept working for years.”

Following a string of cancer cases among firefighters in Albert Lea and other cities in the state, Boss played a key role in passing state legislation to secure funding for equipment to keep firefighters safe from carcinogens and a grant program for firefighters living with cancer or heart disease.

In 2018, Klobuchar and Boss held an event in support of legislation to create a national firefighter cancer registry, which was signed into law just days later.

“I will continue to push for this in Brett’s honor until we find out what’s going on with this,” Klobuchar said.

She talked about the role possible new carcinogens in technology items have had on firefighters developing cancer.

The senator said her house in Minneapolis is two blocks away from the fire station, and she has always enjoyed watching the firefighters coming in and out of the station to serve others.

She said the statement in the Congressional Record will forever include the story of Boss and his firefighting career.

Boss’ wife, Danielle, said her husband fought hard to get the support needed to help his fellow firefighters in the battle against cancer and the impact it can have on them and their families.

“This honor would have meant the world to him,” she said. “He fought hard for himself and his brothers until the end. His family is very proud of all that he did and hope in some way we can continue his fight.”

Boss had been diagnosed with Ewing’s sarcoma in December 2014 and died at the age of 38.