Marilyn D. (Schroader) Moe, 90, of Albert Lea, passed away surrounded by her loving family on Thursday, April 14, 2022, at Ostrander Care and Rehab in Ostrander, MN. 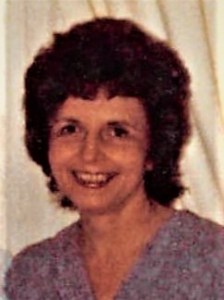 Marilyn was born on November 24, 1931, on the family farm in Winnebago County, IA, to LeRoy and Ida (Skjervheim) Schroader. She grew up in Kiester, MN, attending and graduating from the Kiester schools. During high school, she played the French Horn in the marching band and was voted ‘Band Queen’ by her peers and made a record with her band instructor.

After graduating, she attended teacher’s training and taught in rural schools. She later moved to Albert Lea where she raised her family of three children: Peggy, Brad, and Deb. Marilyn also completed nurses training and worked at Good Samaritan Society for many years.

Marilyn was very active at First Lutheran Church, where she held many positions. Bible study was a lifelong and important part of who she was. She seemed to know everyone, often stopping to chat with people everywhere she went. She was known to have a quick wit and a phrase for every occasion.

Marilyn enjoyed hobbies of all sorts: knitting, crocheting, cooking, baking, and needle point. She especially loved cooking and baking for activities at church. She loved telling short Bible stories to her children and grandchildren.

Preceding her in death were her parents; her sisters and their husbands: Lila (Larry) Hessel, Carmen (Vernell) Meyer, and Gloria (Gary) Walk; her brothers and their wives: Marvin Schroader, Marlin (Marilyn) Schroader, and VirGene Schroader; her nephews: Daryl Schrader, Ryan Schroader, Robert (Holmstrom) Hustad, and Lonnie Hessel; and her sister-in-law, Darla Schroader.

Time for visitation will take place at 10:00 a.m. on Thursday, April 21, 2022, at First Lutheran Church. Funeral Services will begin at 11:00 a.m. with Pastor Roger Fears officiating. Interment will follow lunch at Fairview Cemetery in Kiester.

Memorial contributions may be made in Marilyn’s memory to Peace and Power or Youth for Christ.