A longtime member of the Freeborn County Sheriff’s Office on Monday announced his bid for sheriff in the upcoming election. 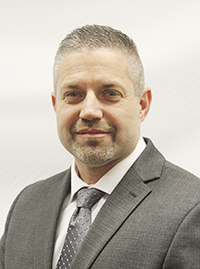 Bennett, 45, was born and raised in Albert Lea and graduated from Albert Lea High School in 1995.

He served with the Minnesota National Guard from 1996 to 2002, holding the rank of specialist E4.

After attending basic training, he went to Alexandria Technical College from 1997 to 1999 to become licensed as a law enforcement officer.

From there, he worked with the Blooming Prairie Police Department for a short time before starting with the Freeborn County Sheriff’s Office under Sheriff Don Nolander in January 2000.

Also during that time, he said he went to several schools, including Desert Snow, a nationally known crime interdiction school, and started learning that he wanted to become a supervisor because of his interest in the administrative end of the job.

He started taking classes and talking with some of the supervisors and the sheriff at that time and was promoted to patrol sergeant in July 2011, a role he continues in today.

As patrol sergeant, he has taken part in a Bureau of Criminal Apprehension leadership conference, completed the BCA supervisor management and senior management programs — completing eight to 10 classes in each program.

He is the supervisor of the K-9 program, has been the Toward Zero Deaths coordinator for the Sheriff’s Office and has handled the scheduling for detectives, sergeants and patrol deputies since 2016.

Bennett said once he became a sergeant, he wasn’t sure how far he wanted to go with it. He knew he wanted to be a supervisor and ended up taking on more administrative duties while on light duty because of an injury and enjoyed it.

Even with the interest, he said he questioned whether he wanted to go through with a campaign after seeing how divisive the election was eight years ago but ultimately decided to proceed and do his best moving forward to set a different tone.

“No matter who I run against, I’m going to do my part not to let it get to how it was eight years ago,” Bennett said. “That hurt a lot of people, a lot of families, and it separated the Sheriff’s Office dramatically.”

If elected, Bennett said he will focus on improving staffing for the Sheriff’s Office. He said current Sheriff Kurt Freitag has been working diligently on it, but he knows much more will need to be done. He hopes he and his team can discuss different techniques to recruit more staff and elaborate on plans already in place.

“That’s the No. 1 crisis we have right now for all the Sheriff’s Office,” Bennett said.

He said Freitag has done a great job with staff training and equipment, and he would hope to maintain that equipment in the position.

He would also like to continue support for the K-9 program, noting he thinks it has been a valuable asset for the department. The department’s current K-9, Stalker, is nearing the end of his tenure in his eighth year, as K-9s generally are in service eight to 10 years based on their health.

He said he thinks he brings a level head, good experience and good knowledge of how to run a Sheriff’s Office.

“I think I have the support of a lot of people in the Sheriff’s Office, which means a lot. I will try to build any kind of morale issue by listening to both the patrol side, the supervisor side and try to come to a happy medium where they can all start working together and come back as one.

He said there are a lot of morale concerns amongst the patrol deputies, mostly because of scheduling, as many are having to work additional shifts to cover staffing gaps. He noted he would also like to go back to having the deputies on the same schedules for a full year and reward those employees with more seniority.

Bennett said he looks forward to getting out and speaking with people about his campaign. He has an email address set up for the campaign at bennettforsheriff@outlook.com and hopes to get his campaign Facebook page up in the coming days.

Bennett is married to his wife, Jenny, and has three stepchildren and one daughter.

Divided Minnesota Legislature will return with much undone