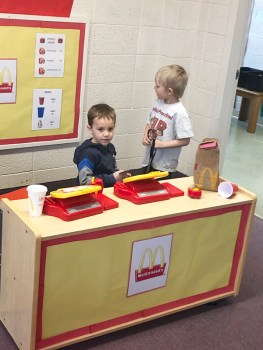 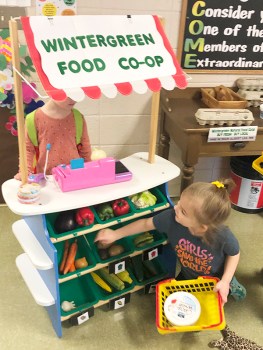 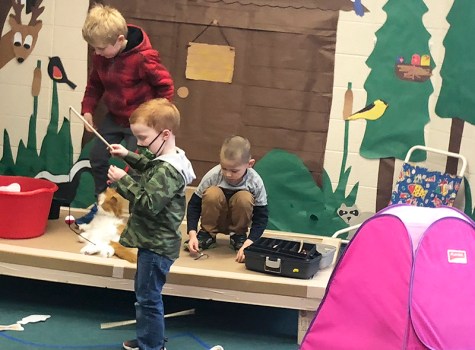 McDonald’s, a vegetable co-op and a pizza store can all be found inside Albert Lea’s United Preschool this week and next, potentially even longer. That’s because the preschool is having their open school event.

“What we’ve developed is we’ve made it into a little Albert Lea, and so we kind of talk about community and the people that help us and we have in the community and how they can help the community,” said Annie Olson, a teacher at the school.

So Olson and other staff have built a little town for the children to explore. But leading up to the event, students made some of the props, including replicas of things found in the community. They then took a list of what the students found and made a miniature model of the places the children were familiar with.

After that, the students would operate the booths as if they were actual workers and interact with other students pretending to be customers.

According to Olson, at any given session 40 children will participate, with 100 partaking in total.

She estimated the event has been happening for 40 years, although the event hasn’t always been little Albert Lea. During the activity, Olson tries to incorporate areas for science, art and other benchmarks for preschoolers.

“We have them all set up so the kids can just explore at their own will,” she said.

Olson’s biggest goal for the project is for the students to develop their social skills, especially language.

She also hopes the activity can get the children more familiar with the community.

“It’s kind of a cumulative through the year,” she said. “Just like working on some social skills and all that kind of thing.”

Olson has taught at United for 25 years, and said the activity was a great way of changing a routine while also benefiting students.

“The kids have learned a lot of skills and are more comfortable in the school setting,” she said. “So they get to explore a little bit more, have a little more freedom. It just gives us a chance to watch the kids at play, because we feel strongly that they learn the most through play when they’re provided with activities that are learning activities during their play.”

“Little Albert Lea will still be set up,” she said.