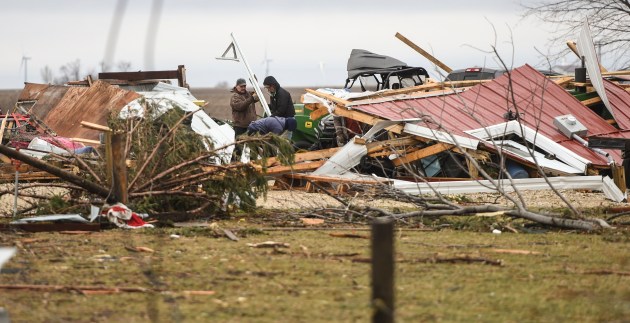 People dig through debris on the north edge of Taopi Wednesday morning as they begin clean-up following Tuesday night’s powerful storms that produced a likely EF2 tornado according to the National Weather Serice. Eric Johnson/photodesk@austindailyherald.com

A house in Taopi had its entire east side stripped away by Tuesday night’s severe storm. Eric Johnson/photodeks@austindailyherald.com

An unattended dog trots past the ruins of a structure in Taopi Tuesday morning. Eric Johnson/photodesk@austindailyherald.com 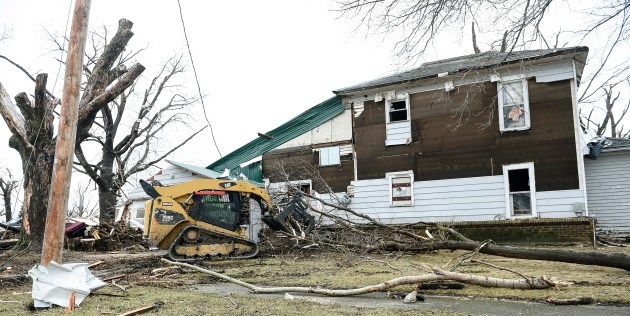 A skid loader is used to move downed tree limbs on a property in Taopi Wednesday morning. Eric Johnson/photodesk@austindailyherald.com 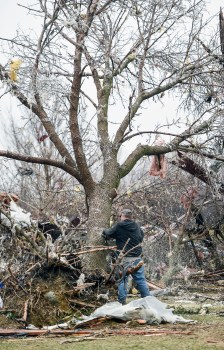 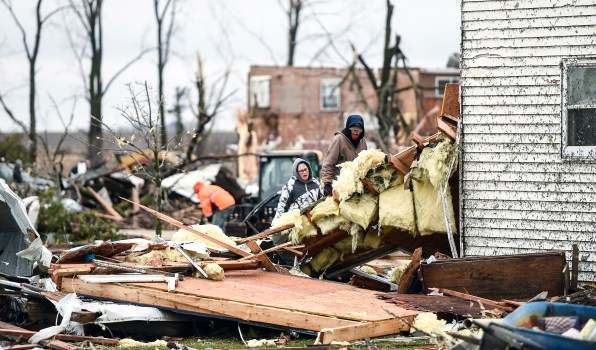 A pair of Taopi residents look through damage to a residence Wednesday morning after a storm producing what was mostly like an EF2 tornado swept through the community Tuesday night. Eric Johnson/photodesk@austindailyherald.com

TAOPI — Taopi residents are picking up the pieces of their homes Wednesday morning after a line of storms producing tornadoes plowed through the tiny community east of Adams.

Several homes were revealed to have major and minor structural damage and trees were strewn everywhere as officials work to assess the full extent of Tuesday night’s storms that ran through northeast Iowa and southeast Minnesota.

A tweet issued by the National Weather Service out of La Crosse, Wisconsin said damage indicates the storm was likely an EF2 tornado that swept through Taopi.

Angie Smith, a resident of Taopi, said her family’s home was damaged, but not to the extent some of her neighbors experienced including one home that had the entire east side sheared off as if by a knife.

“I’m overwhelmed. I’m thankful,” she said. “We’re one of the lucky ones. All of our neighbors had to go somewhere else.”

Storms started impacting the area earlier in the evening Tuesday. The National Weather Service had placed Mower County in a tornado watch from around 7:30 p.m. until midnight on Tuesday, one of several severe watches and warnings to blanket the area.

According to a press release Wednesday morning from Mower County Sheriff Steve Sandvik, a tornado warning was issued for southeast Mower County at around 10:37 p.m.

Smith said the entire episode happened in a short amount of time. She said that her home lost power at around 10:45 p.m. and the storm came through 10 minutes after that.

“It was roaring,” she said. “The moment we ran through to the basement we heard windows shattering. We were down in the basement for maybe a minute.”

However, for that brief time period, the damage was extensive. The worse part of the damage was a swath of the community running from the southwest side of Taopi and continuing northeast. However, down trees could be seen along Highway 56 as you drove into Taopi from the west.

Astoundingly, there were only minor injuries. Sandvik said that two residents had been trapped in their basement. They were rescued and taken to Mayo Clinic Health System-Austin for evaluation and treatment of non-life threatening injuries.

The storms were part of a very large system that brought severe storms and tornadoes to Iowa and Minnesota and a blizzard further north, especially in North Dakota.

Aside from heavy rains, Austin largely escaped the worst of the storms; however, Austin Police Chief David McKichan in a press release of his own reported that some branches and tree debris were reported.

Although, it does appear that a heavily localized downburst on Sixth Street NW between Eighth and 13th Ave. NW caused more damage.

“There were some bigger trees sheared off or pushed over here and the overnight staff I spoke to [Tuesday morning] said a camper had been ‘imploded,’’ McKichan said.

As for residents of Taopi, this is only the beginning of the long process of cleaning up.

“Honestly, I have to keep telling myself everybody is safe,” Smith said. “It’s just stuff.”