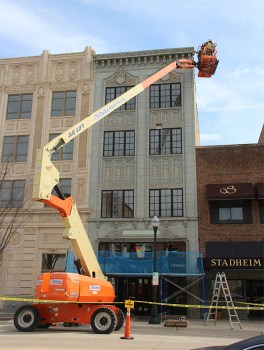 Crews with Advanced Masonry Restoration remove damaged terra cotta blocks from the Jacobson Apartments building Monday. The blocks will be sent to a company in California to make new blocks and then send them back to be installed on the building. Sarah Stultz/Albert Lea Tribune 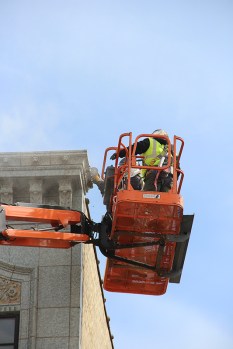 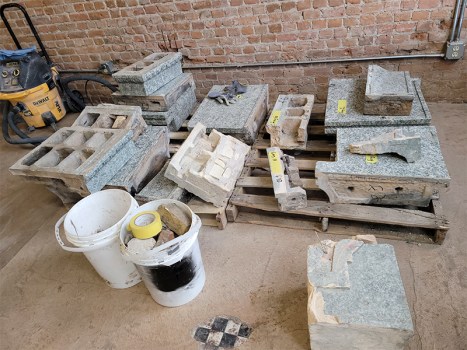 The terra cotta blocks that will be sent to California to make replacements sit on pallets after being removed from the Jacobson building. Provided

The first step to repair the facade of the Jacobson Apartments building in downtown Albert Lea kicked off this week.

City building official Wayne Sorensen said crews with Advanced Masonry Restoration out of St. Paul  removed about 10 pieces from off of the building, which will be sent to terra cotta company Gladding McBean in California.

The building, between the former Freeborn National Bank building on the north and Stadheim Jewelers on the south, has cracks developing on mortar joints and terra cotta blocks that are cracking. A few have also fallen off of the structure.

Sorensen said the architect initially identified 72 individual blocks that need to be replaced on the building, and out of those pieces there were about seven or eight different designs.

Artists with Gladding McBean will duplicate the blocks, and then each block could take several months to dry before being glazed to match the existing building.

Gladding McBean is one of three companies in the whole country that makes high-quality architectural terra cotta, according to its website.

The Albert Lea City Council in February approved a contract for $301,500 with Advanced Masonry Restoration for the project. City Manager Ian Rigg at that time said the estimated total cost, however, will be closer to $500,000 when adding in engineering, architects and the cost of repairing more than anticipated units. The city had budgeted $600,000 for the repairs and has received a state grant for up to about $276,000.

Sorensen said it is expected to take up to six months for all of the new blocks to be made. While there is a possibility the pieces will be done and placed this fall, the project could run into the spring.

In the meantime, while all of the work to duplicate the blocks takes place in California, residents should not expect to see much happening locally.

In addition to replacing the damaged terra cotta blocks with new blocks when the time comes, crews will replace the steel supports on the building that are underneath the blocks.

The city in 2006 replaced the windows on the building as well as roofs on both the Jacobson building and the Freeborn National Bank building next door. At that time, the terra cotta was repaired on the bank building, he said.