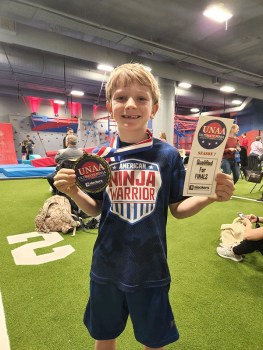 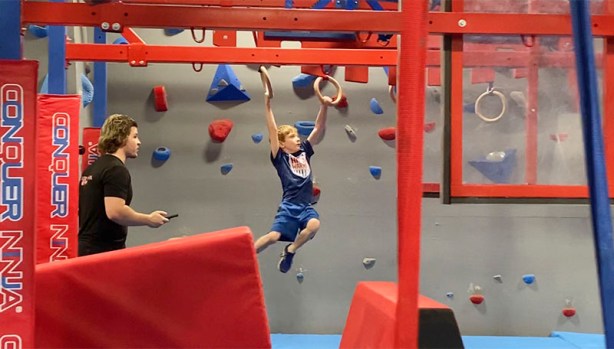 Eight-year-old James McGinnis competes on the course over the weekend in St. Paul. Provided 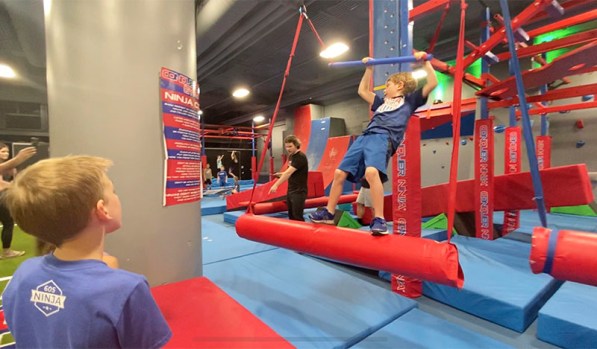 James McGinnis competes over the weekend on the ninja warrior course in St. Paul. Provided 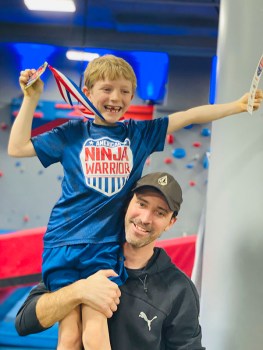 James McGinnis is all smiles with his father, Justin McGinnis, after winning third place and advancing to the Ultimate Ninja Athlete Association World Series Championship Finals in Las Vegas. Provided

An 8-year-old Ninja Warrior competitor from Albert Lea is advancing to the Season 7 Ultimate Ninja Athlete Association World Series Championship Finals in Las Vegas in July after placing third at a qualifying competition over the weekend in St. Paul.

“I was a little surprised,” second-grader James McGinnis said, of when he found out he would advance. “I was very happy, and I was just glad that I made it.”

James, son of Kelley and Justin McGinnis, said when he was younger he was in boys gymnastics through Albert Lea Gymnastics Club, and when the club transitioned into having an American Ninja Warrior program, he decided to give that a try.

After his first year he liked it, so he decided to participate a second year. The ninja program lasts from September through May, in which he goes into practice once a week at the Albert Lea club.

James also competed at two other regional competitions prior to the world-qualifying competition in St. Paul.

His mother said for this past Sunday’s competition, the competitors got a video the day before showing the course. Then when they arrived the day of the competition, they had a walk-through, but they weren’t allowed to touch any of the equipment or get practice runs.

She said competitors who may live in the area where the competition was held may have had some home-club advantage, having been able to practice on their equipment before, though it may not be set up in the same way the day of the competition.

James was the first person in his 7U age group to compete.

Competitors go through a series of obstacles and receive points for every one they successfully complete. In that competition there were 12 possible points. Judges also look at the time it took for each competitor to complete the course.

James said he failed on two obstacles — one was the cheese boards and the other the lache bars — so he received a total of 10 points. There was another competitor who also finished with 10 points, but because James finished the course faster, he claimed the third-place slot and moved on to the finals. The top three finishers advanced.

“It came down to the last one to know if he would make third,” Kelley McGinnis said.

The competition in Las Vegas will be July 21.

“We’re really excited to see what happens next,” she said.

His coach, Darin LaFrance, described James as “a natural” for the sport.

This was the first year for the Albert Lea Gymnastics Club to have a team and compete in the sport, and he said it is likely there will be a few other Albert Lea students who advance to the world competition through other regional competitions in South Dakota and Iowa in June.

He congratulated all of the local competitors who take on the challenge.

Kelley McGinnis said they anticipate James will have tougher competition at the Las Vegas competition, though it will likely be a more even playing field because everyone is coming in from different clubs.

She said the family is grateful the Ninja Warrior program is offered in Albert Lea, noting that the Albert Lea Gymnastics Club is the only gym south of the Twin Cities with the program.

James said outside of Ninja Warrior, he also plays baseball and soccer. He enjoys playing catch with his dad, jumping on the trampoline, climbing trees, riding his bike and going out in his kayak.