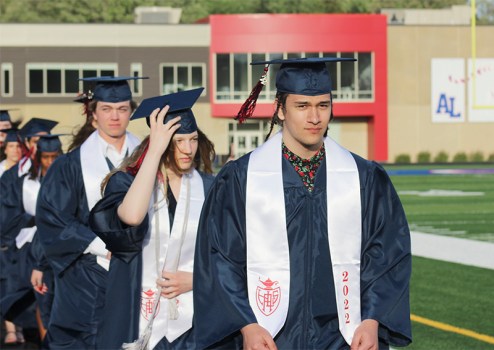 Albert Lea High School students walked down the sidelines on both sides of Jim Gustafson Field Friday night as they walked to their seats at the start of the commencement ceremony. Sarah Stultz/Albert Lea Tribune 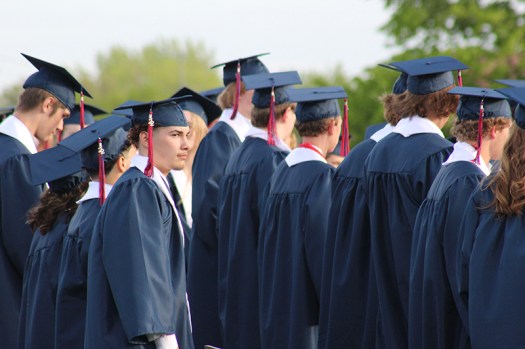 An Albert Lea High School student looks to the side during the commencement ceremony Friday. Sarah Stultz/Albert Lea Tribune 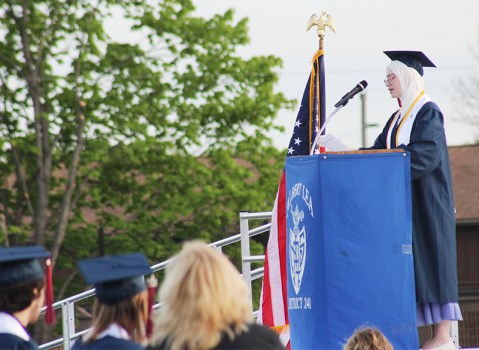 Samantha Brumbaugh addresses her fellow students during one of two student speeches in the ceremony. Sarah Stultz/Albert Lea Tribune 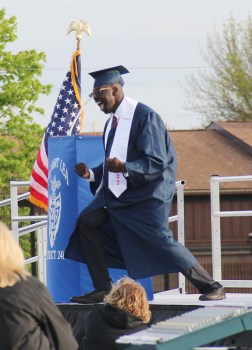 Garang Dual steps aside from the podium for a moment to encourage his fellow classmates to show a little excitement Friday during the commencement ceremony. Sarah Stultz/Albert Lea Tribune 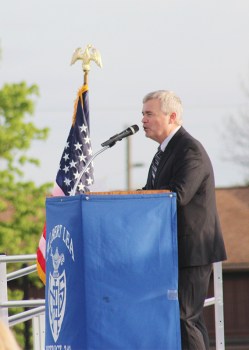 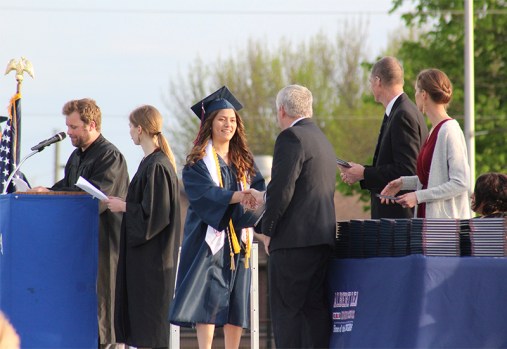 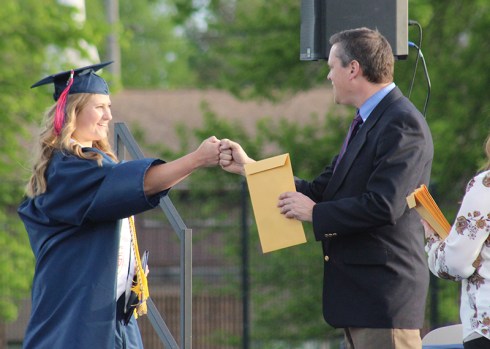 Albert Lea High School Principal Chris Dibble gave every student a fist bump as he gave them their diplomas on the side of the stage. Sarah Stultz/Albert Lea Tribune 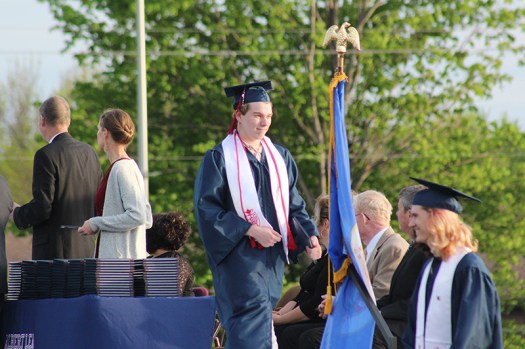 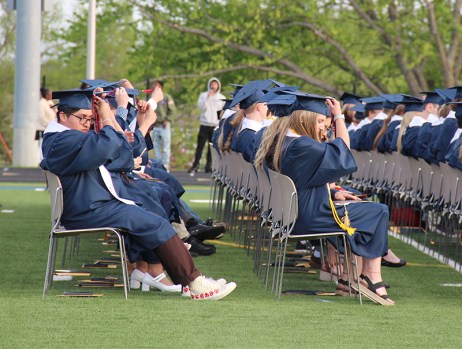 Students move their tassels from the right side to the left side after receiving their diplomas Friday night. Sarah Stultz/Albert Lea Tribune 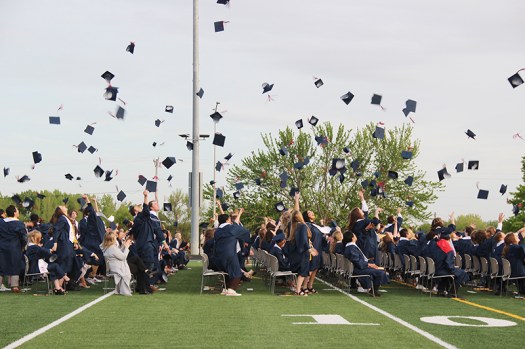 Students from the Albert Lea High School class of 2022 throw their hats in the air at the end of the commencement ceremony. Sarah Stultz/Albert Lea Tribune

After a morning of rain, weather cleared up and the Albert Lea High School students from the class of 2022 had an outdoor graduation Friday night at Hammer Field.

“I just want to take a couple minutes tonight to reflect on a couple important steps that you’ll be facing after tonight,” he said. “I call it choices.”

He noted how some students decided to head straight to the workforce.

“The old saying goes, just find something you enjoy doing, and you’ll never work a day in your life,” he said.

He observed that some students plan to continue their education.

“Stay open-minded with that one when you go because … there’s a lot of us that found that our careers that we start with or even go to school to start with aren’t always what we end up with,” he said. “Good luck with that.”

He then said there were students who weren’t sure what they wanted to do and were undecided.

“When you’re undecided, that gives you an opportunity to go out and try a lot more things because you’re still searching for what you really enjoy,” he said. “Don’t sit around and wait, get on it and get busy.”

He also emphasized the importance of picking the right personal choice, doing the best you can and being proud of your accomplishments.

“If you want to be successful in life, work hard and don’t quit working until you become the best that you can be,” he said.

He urged the class to plan how to achieve goals and to work to obtain them.

“Nothing in life comes easy so take control of your own life and don’t wait for someone else to step up and write your story for you,” he said. “Remember, in your years ahead not everything will be easy. If you’re having troubles, ask for help.”

He closed his speech by thanking Superintendent Mike Funk for his years in the district and wished him luck as Funk is set to take over Stillwater Area Public Schools.

Samantha Brumbaugh and Garang Dual then addressed their fellow 2022 graduates.

“These last couple of years have not been the easiest,” Brumbaugh said. “I can guarantee you that none of us were expecting a pandemic when we started high school.”

She described that time as a period where students had to find a new way to learn and said while it was initially difficult, students learned to adapt.

“This ability to adapt and to make the most of a difficult situation should define our actions as we go forward with our lives,” Brumbaugh said. “We have already proven that we are able to overcome drastic changes to our lives.”

She said it would be strange to adjust to new lives outside of school, but urged her classmates not to forget their time at Albert Lea Area Schools, and called their experiences moments they would never get again.

In his speech, Dual thanked families, friends, students and staff. He then touched on the importance of making the most of life, and said it was every single moment that made a person who they were.

“Every single moment that you do here counts and goes towards your future,” he said.

And in his final remarks, Funk urged the graduates to always expect the best.

But first he asked the audience to applaud every graduate there and noted he was particularly proud of his connection to the class.

“Therefore, I’ve had the privilege of overseeing your education for your entire time here in Albert Lea. It has been my tremendous professional honor to have done so.”

He said when he first arrived, the district was traditional in preparing students for college, but he said working with the board allowed them to develop a Pathways to Education program to ensure more opportunities for students that aligned with their interests.

“Today, approximately 30% of our graduates enter the workforce right after high school,” he said. “As a school system, we’ve done a better job of preparing you.”

He closed his remarks by telling students they were entering the last stages of their education, and told them that what they did next was their own responsibility.

“We have taught you skills that will help you transition to college, or the workforce or the military,” he said. “You’ve developed the base to be successful in life. Your success after high school will be determined by how you apply those skills you absorbed during your education in Albert Lea.”

Following his remarks, diplomas were presented by Funk, Principal Chris Dibble, Teacher of the Year Burke Egner and members of the school board.

The class was then dismissed to “March from Carmen.”