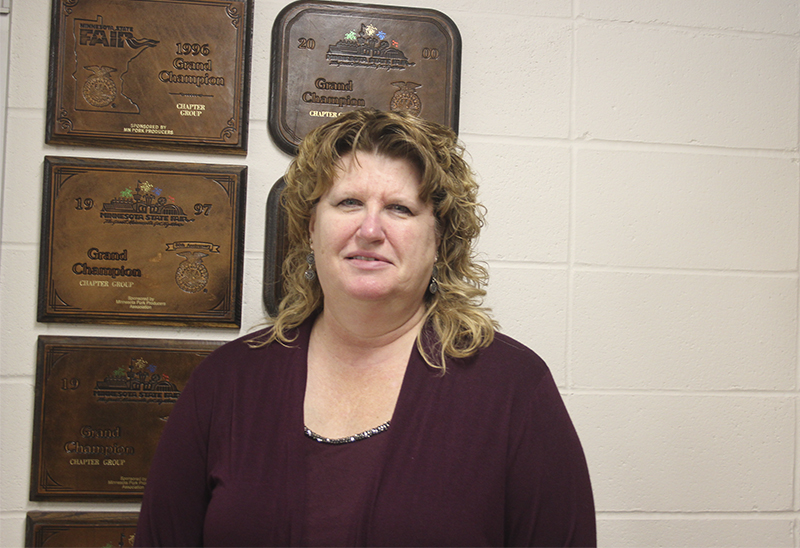 Pamela Koenen, an agriculture education instructor at Alden-Conger Public School, was named Minnesota Ag Teacher of the Year by the Minnesota Association of Agricultural Educators. Koenen has been involved in agriculture her whole life. Alex Guerrero/Albert Lea Tribune

Pamela Koenen, an agriculture education instructor, FFA adviser and coach for the clay target team at Alden-Conger Public School, was recently named Minnesota Ag Teacher of the Year by the Minnesota Association of Agricultural Educators.

She was selected from a pool of six or seven applicants.

To mark the achievement, there will be a ceremony July 13 at a summer conference at Jackpot Junction in Morton.

According to Koenen, there are eight regions in the MAAE, and earlier this school year each region nominated teachers for a number of awards.

“Those region honorees, or nominees, were already recognized in January at our ag tech conference in St. Cloud,” she said. “Then from there you can apply.”

Those who chose to apply were screened by past presidents of the MAAE and scored in different areas on an extensive rubric developed by the National Association of Agricultural Educators, and a decision was made.

Koenen learned she won in April.

“I was surprised,” she said. “I was very humbled. Especially after these last two years, there’s a lot of teachers that are doing a lot of great things and we all deserve recognition because education in general has been tough, especially doing what I do, because we are so used to being able to do the county fair, the state fair and all of those little hands-on activities.”

And having to change how to teach to accommodate social distancing was challenging for her.

“I was very humbled, very honored,” she said. “There’s been a lot of leaders in our industry that have received this award in the past and to be in the same company as those individuals is pretty awesome.”

Among the subjects she teaches are general intro to ag, careers, large and small animal science, advanced animal science, intro to soils, intro to agronomy, natural resource science, horticulture and high school life and careers, along with classes that run concurrent with Riverland Community College.

Koenen grew up on a dairy farm, so for her, doing something with agriculture was always in her plan.

“I always knew I wanted to do something with agriculture,” she said. “I love working on a farm, I love working with — mainly with the cattle.”

Growing up, she baled hay in the summer, though working with cattle was her primary job, something she described as her love.

“I was a dairy princess for two years, so I loved that part about going out and talking to people about dairy farming and educating them about the dairy industry,” she said.

As a dairy princess, she served as an ambassador to the dairy industry, and it was her job to talk about what dairy farmers did, the products they produced and interact with the public. She described her experience as convincing her to advocate for agriculture.

“I love being able to educate people about where their food comes from, about what farmers do,” she said. “Sometimes there’s certain parts of agriculture that get a bad rap, and I think it’s because people don’t understand. They have a misconception or they have this skewed viewpoint that’s put up on Youtube or social media which is not really happening across the large majority of farms across Minnesota, across the country.”

“What we do in the classroom, what we’ve done with FFA, I think there’s a lot of kids that maybe don’t think they’re going to go into agriculture that eventually end up choosing that as a career field,” she said.

This is Koenen’s 31st year at Alden-Conger. Before joining the district, she taught one year at Glenville before taking some time off.

“Honestly, didn’t know if I wanted to go back to teaching,” she said. “Did some subbing, got married, started a family and then started [at Alden-Conger] in 1991.”

Koenen, who had been nominated previously, is from Waverly and graduated from what is now Howard Lake Waverly Winsted. She attended the University of Minnesota-Twin Cities campus where she earned a degree in ag education. She also earned her master’s in ag education.